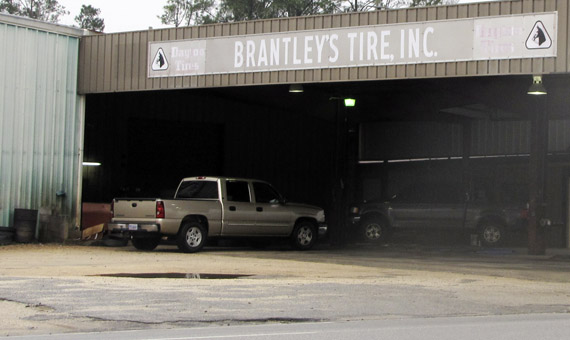 A sign on the door of Brantley’s Tires told the story that has ended 59 years of service by the local company to area residents.

“Due to the economic downturn of the last several years and upon the retirement of the owners, as of 5:00 p.m. on Wednesday, January 26, 2011, Brantley’s Tires, Inc., is no longer in business. We appreciate your support and loyalty over the past 59 years. It has been a privilege to serve the people of Atmore. Sincerely, Joe and Mary Emma Brantley.”

Mary Emma Brantley said the closing of the business has been a decision that was made after much consideration and a lot of time in prayer.

“The closing of the shop was a difficult decision and one that was made after spending a lot of time on our knees in prayer,” Brantley said. “It has been very hard on both Joe and I. It’s almost like a death to us. To have been in business for so many years has been a blessing to our family.”

Brantley said the couple plans to make the best of their decision by spending time with their family including four grandchildren.

“I plan to spend time with my grandchildren if the Lord allows it,” Brantley said. “Joe plans on working part-time and I hope to be able to help my children and grandchildren.”

Brantley said the company began when W.F. Brantley Sr., opened shop in 1952 in the location at the rear of the building where Atmore Insurance now exist.

“Mr. Brantley opened a shop there and eventually moved over to a little service station where Jus’ Because is now,” Brantley said. “He stayed there for a brief time until he purchased the property on North Main where Brantley’s has been since then.”

Brantley said the years have brought many blessings to her family making the closing of the business more difficult.

“It has been such a blessing to us over the years to serve Atmore,” Brantley said. “If it had not been for God and the good people of Atmore who supported us we couldn’t have been in business as long as we have. Some of our customers have been with us for more than 50 years. It’s hard to see that end.”

Brantley said the personal customer service offered by the owners and staff at Brantley’s is something she hates to see come to an end for Atmore’s residents.

“We were happy to give our customers personal attention,” Brantley said. “We hope that Atmore’s residents will be more supportive of local businesses. Without the support businesses can’t stay open. Please don’t take local businesses for granted. If you do, there’s a chance you could wake up tomorrow and find them gone.”

Atmore Area Chamber of Commerce Director Sheryl Vickery said the closing of the store was a surprise and was indicative of economy being faced in the area.

“It’s a sad day for Atmore to see them go,” Vickery said. “It’s a sign of the times we’re living in right now. I couldn’t believe it when I heard and had to get in my car to drive up there and see for myself.”

The business has been known for customer service throughout their long history in Atmore.

“We are losing great customer service with the closing of Brantley’s,” Vickery said. “You can bet that if you needed anything, they would go the extra mile to help you. We are certainly going to miss that kind of customer service.”

Joe Brantley, with his wife Mary Emma by his side, became the soul owner of Brantley’s in 1994 where they have operated the business together until last week.

APD officers search for the man who stole this CSX truck and crashed it on Second Street Tuesday morning.|Photo by... read more