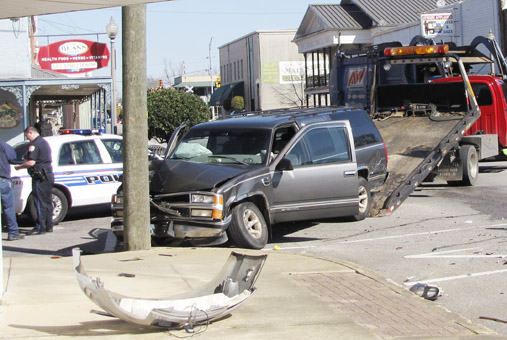 This Chevrolet Suburban was involved in a two-vehicle accident on South Main Street this morning.|Photo by Allison Brown

Traffic through downtown Atmore was slowed Tuesday morning by a two-vehicle accident at the intersection of South Main and Church streets.

According to APD reports, Donna L. Phillips was traveling southbound on South Main Street in her 1999 Chevrolet Suburban approaching the Church Street intersection red light, when her SUV collided with a 2004 Pontiac GTO driven by Anthony English of Atmore.

The impact of the crash, which occurred at approximately 9:50 a.m., could be heard several blocks away inside nearby businesses and sent Phillips’ Suburban into a utility pole in front of the American Legion building. English’s car came to rest about 30 yards from the point of impact, according to APD reports. He had been traveling westbound on Church Street.

No serious injuries were reported by either driver or the passenger in Phillips’ SUV as a result of the accident. However, Phillips was cited for no proof of insurance.

Later that afternoon, another fender bender was reported on South Main Street in front of McDonald’s involving another SUV and Kia Sephia. No injuries were reported.