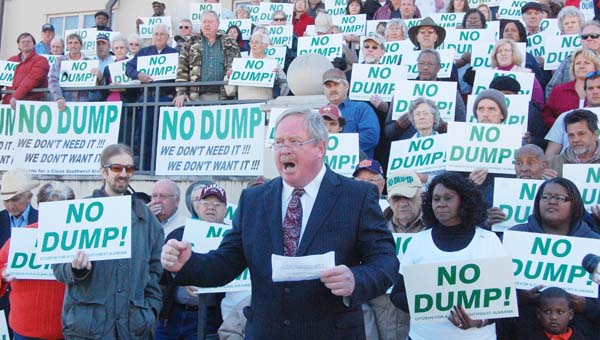 A four-year-old group opposed to a proposed Conecuh County landfill has retained a law firm to seek ways to fight the project.

“It is our intention to fight this from every legal standpoint,” attorney David Steele said.

Citizens for a Clean Southwest Alabama held a press conference on the steps of the Conecuh County Courthouse Monday, following the county commission meeting. CCSA President Johnny Andrews said the group was frustrated that it had not been given a spot on the commission’s agenda.

“We want to know why the commissioners have decided not to hear from the people they represent,” Andrews said, as dozens of people on the courthouse steps behind him waved “No Dump” signs for television and newspaper cameras.

During the commission meeting, commission Chairman Wendell Byrd said the county will hear from everyone who wants to speak at a scheduled public hearing March 10.

“If we let everybody speak today, it could bog our meeting down,” he said.

Also Monday, the county adopted a set of rules that will govern the public hearing, which will be held at 9 a.m. Thursday, March 10, at Reid State Technical College.

Conecuh Woods LLC has proposed building a 5,100-acre landfill just north of the intersection of Alabama Highway 41 and Interstate 65, near Repton.

New York writer, Dwight Zimmerman, co-author of “Uncommon Valor: The Medal of Honor and the Six Warriors Who Earned It... read more