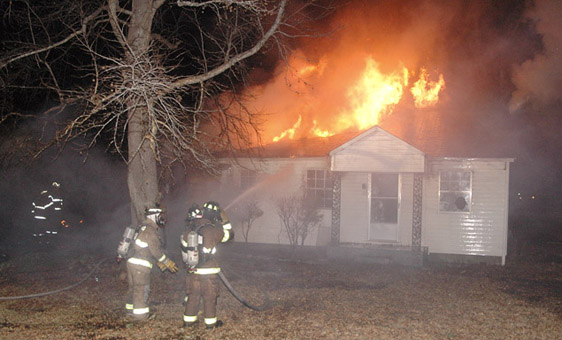 Two fires that damaged one Atmore home and destroyed another over the past two months have both been declared arson, according to officials with the Alabama State Fire Marshal’s office.

Investigators have spent the last several weeks reviewing their findings from each fire and recently made the determination that they were “set fires.”

The first fire damaged the house located at 212 Clark Street on Dec. 31, 2010. At the scene, it was suspected that a flammable material had been tossed onto the front porch igniting the fire, but officials did not release the findings in the case.

Officials with the Fire Marshal’s Office also determined that the blaze that destroyed the home at 800 W. Craig Street on Jan. 8 was also arson. The home was totally involved upon fire personnel arrival just after 2 a.m. and completely destroyed the wooden structure.

According to fire officials at the scene, the owner of the home, Karean Reynolds, who arrived at the scene approximately 30 minutes after the fire began, stated that he did not leave any appliances or heaters running when he left the residence.

Reynolds’ blue Chevrolet pickup truck parked in front of the house was also destroyed in the fire.

There is no indications that the two fires are related, according to officials.

The Fire Marshal’s Office also released the results of their investigation of a Jan. 25 house fire located at 152 Short Street as “undetermined at this time.”

The early morning fire destroyed the wood-framed structure, which did not have running water or power, according to McGhee.

The Fire Marshal’s office requests that anyone with information regarding these arsons or any other possible arsons to call its Alabama Arson Hotline at 1-800-654-0775. Callers do not have to identify themselves.

MONTGOMERY -“We’re a lot worse off than you think.” One month in to his administration, that’s the message Gov. Robert... read more