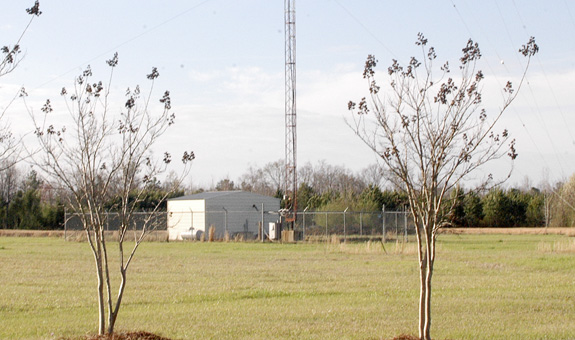 Atmore's 105.9 will be getting a new transmitter.|Photo by Chandler Myers

Once work on the transmitter for WBZR-FM in Atmore are completed this weekend, listeners of the radio station will be able to stay tuned in longer.

According to Lee Hagan, president of Gulf Coast Broadcasting, more than $11,000 in repairs including the installation of a new transmitter began Friday and are expected to be completed this weekend.

Hagan said it was a heavy job with the old transmitter weighing about 1,200 pounds and with the new one weighing in at 700 pounds. He commended Coley employees for their assistance.

“We thank Coley Air Conditioning for all their help,” he said. “The power transformers in the older equipment are much larger and heavier because the old units use tubes and are less efficient in generating the same power output. Solid-state use no tubes and are much higher efficiency, so power supplies are smaller and lighter.”

The WBZR studio is located in office space leased from Coley.

Hagan said the repairs were needed after the old transmitter, which generates the power that is radiated into the air and is hooked to the antenna near the top of the tower by a coaxial cable, was struck by lightning during a storm on July 6, 2010 destroying numerous internal components lowering the power of the transmitter tremendously.

“When we saw the severity of the damage, we worked with the insurance company to determine should the transmitter be repaired or replaced,” Hagan said. “It was determined that repair costs would be substantial and with the age of the transmitter, it made sense to replace it with a new, modern solid-state unit.

Since transmitters are custom made for each station, it took several months to receive the insurance claim and acquire the new unit, Hagan said. He added the coverage area of the radio station was reduced considerably with the temporary low power transmitter. When the replacement is complete the coverage will be back to normal and may be better than before due to the increased efficiency of the new transmitter.

“During that time, we were only putting out about 10 percent of normal power, so useable coverage was probably no more than 5 to 10 miles,” Hagan said. “Power with the new transmitter will be the same as before, so basic coverage will be the same. However, the newer solid- state transmitters have better audio characteristics, so they are much more efficient and provide more useable signal at the distant edges of coverage.”

Hagan said the work does not stop with the installation of the new transmitter. He said since the two transmitters are of different sizes, the radio station engineer will have to make new connecting cable for everything to be hooked to power, antenna and other equipment at the transmitter site.

WBZR-FM in Atmore, with sister station WBZR-AM in Robertsdale, emphasize the “news-talk” formats as “buzz radio” highlighting the “latest buzz” in news. The Buzz starts your weekday morning with 3 hours of LOCAL talk on The Morning Buzz. The Buzz line-up also includes Conservative Talk from Glenn Beck, Dennis Miller and Financial Talk from Dave Ramsey.

A Tuesday afternoon execution of a search warrant netted the arrest of a Brewton man who now faces a variety... read more