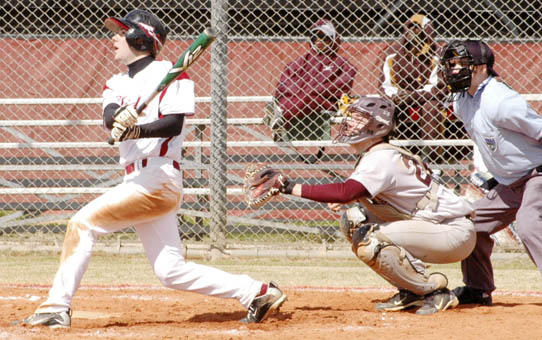 Northview Chief Taylor Martin watches the ball fly after a big hit during the Chiefs’ match up against the Pensacola Tigers last season.|File Photo

Northview went 2-3 in their recent stretch of games with the Chiefs gaining wins over Ackerman High School on Monday out of Mississippi and Ponce De Leon on Friday. The Chiefs losses came in a doubleheader to Pensacola High School on Saturday and Jay on March 10.

The Chiefs now sit at 5-8 on the season, but have a 3-1 record in their district.

Northview’s next game is at Escambia Academy in Canoe with the first game being beginning at 4 p.m. with the junior varsity.

Northview pickedup their fifth win of the 2011 season with against an out-of-state team on Monday as the Ackerman (Miss.) Indians came to Bratt, Fla. and were shut out 3-0 by the Chiefs.

The Chiefs (5-8, 3-1) struck early with two runs to open the first before finishing off the Indians with another run in the sixth inning.

After holding the Indians scoreless in the top of the inning, the Chiefs jumped ahead 2-0 with Dabney Langhorne (0-for-1, R) and Brandon Sheets (2-for-3, 2SB, 2R) crossing the plate.

Langhorne made it first by getting beaned by a pitch, while Sheets followed up with a single. Langhorne then scored on an error by the catcher, while Sheets was knocked in by Austin Arrington (2-for-3, RBI).

Following the first, the teams battled back-and-forth with the Chiefs holding their 2-0 lead until the sixth inning when they added their third run.

In the bottom of the sixth, Sheets hit into a fielder’s choice and made the most of his time on the base path to score his second run of the game.

The Chiefs held strong for the final three outs in the top of the seventh to come away with the win.

The Tigers of Pensacola High School made the trip to Northview on Saturday for a doubleheader and came away with a huge 12-2 win in the second game of the match up.

The Chiefs (4-7, 3-1) fell behind early in the game as the Tigers opened the contest with five runs.

After the Chiefs were held scoreless in the first inning, the Tigers again got on the scoreboard with two more runs in the top of the second and added their final five runs in the fourth inning.

Trailing 12-0 entering the bottom of the fifth, the Chiefs finally found some offense as Scott (1-for-2, R) and Taylor Martin (1-for-2, R) both scored after reaching on singles, but Northview could not mount a comeback following those two scores to give Pensacola the win.

Runs came by the bunch in the first game of the doubleheader between the Pensacola Tigers and the Northview Chiefs on Saturday in Bratt, Fla.

The Chiefs (4-6, 3-1) and Tigers went round for round with the Tigers landing the knockout punch in the ninth inning to come away with a 12-11 win.

Both teams hit the scoreboard in the second inning with Harigel scoring for the Tigers and Austin Arrington (1-for-4, 2B, R) tying the game at one for Northview.

Pensacola took the lead back in the top of the second as they scored nine runs with Black, Dukes, Harigel, Gianotti, Wade, Travis and Wiggins each crossing the plate.

After holding the Tigers scoreless in the fourth inning, the Chiefs tied the game with three runs as Langhorne, Sheets and Scott all scored their second runs of the game.

The battle to the finish would be a classic as the teams both scored runs again in the seventh inning with Wiggins scoring for Pensacola and Scott scoring his third run for Northview.

The Tigers would strike one final time in the top of the ninth with Travis scoring to put Pensacola on top 12-11 where the score would stay after the Chiefs were unable to score one final run.

For the fifth time this season out of six games, the T.R. Miller Tiger baseball team defeated the Escambia County... read more