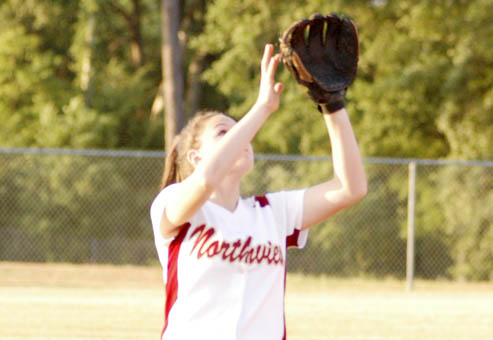 NHS Lady Chiefs Shawna Montgomery gets under a flyball during a Northview game last season.|File Photo

After opening last week with a loss to the West Florida Lady Jaguars, the Northview Lady Chiefs closed out the week with a victory over the Ponce De Leon Lady Pirates on Friday and a 3-0 loss to the Baker Gators on Thursday afternoon.

With the win and the loss, the Lady Chiefs are now 5-7 on the season.

The Lady Chiefs next game will Friday at home against Freeport. Games begin at 4:30 p.m. with the junior varsity.

The Lady Chiefs of Northview High School earned their first win in six days by beating the Ponce De Leon Lady Pirates 7-4 on Friday in Northview.

The Lady Pirates took a small lead in the top of the first with K. Carroll and A. Harper crossing the plate.

In the bottom of the first, the Lady Chiefs took the lead with four runs of their own.

The highlight of the inning came by way of a two-run triple by Mongtomery that scored Doran and Vickery.

Ponce De Leon bounced back in the second inning to tie the game at four with D. Rushing and S. Yates both reaching base and making it across home plate.

The Lady Chiefs did not let the tie last long as they went back on top 5-4 in the bottom of the second with Ashley Digmon (2-for-4, 2B, R) reaching on a double and scoring on a single by Vickery.

Following a scoreless inning and a half, the Lady Chiefs added another run to the scoreboard in the bottom of the fourth with Lauren McCall (0-for-3, R) crossing home plate.

McCall made it to first with an error by the third baseman and scored on a double by Digmon giving Northview a 6-4 lead.

After shutting down the Lady Pirates again in the top of the fifth, Northview scored their final run with Hayley Simpson (1-for-3, R) making the trip around the base path.

Simpson got on base with a fielder’s choice and scored on a passed ball by the catcher to put Northivew on top -4.

The Lady Chiefs’ defense held strong for the two final innings to pick up their fifth win of the season.

Doran started on the mound for Northview pitching seven innings giving up four runs, while striking out six batters.

The Lady Chiefs (4-8) played a tight contest with the Lady Gators with Baker only scoring one run through five innings before adding their final two in the sixth inning.

Baker jumped on top of Northview 1-0 in the top of the second after neither team could get anything started in the first inning.

Following the run by the Lady Gators, the game went to a stalemate with Baker unable to capitalize and Northview unable to find any offense.

In the top of the sixth, the Lady Gators added to their one-run lead with Stevenson scoring her second run of the game and J. Linzy picking up her first to put Baker ahead 3-0.

Northview would fail in their final two chances to score any runs to give Baker the win.

EA Cougar Ryan Linam takes a swing at a pitch during a Cougars’ game in 2010.|File Photo The Escambia Academy... read more