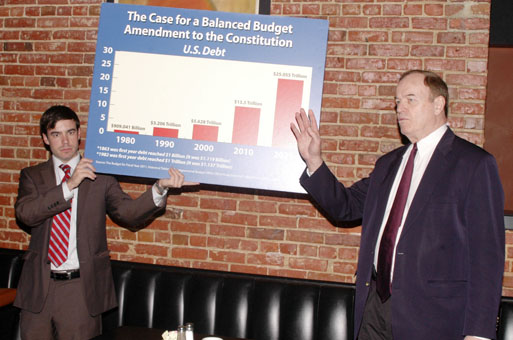 United States Senator (R-Ala.) Richard Shelby speaks about the national debt during his visit to Atmore on Monday morning.|Photo by Adam Prestridge

With a U.S. national debt of more than $13 trillion, Sen. Shelby (R-Ala.) said the country is on a road to “financial destruction” if spending is not controlled calling it the “No. 1 issue facing our country.”

“I do worry about this country,” Shelby said during a town hall meeting at Pintoli’s Italian Café in Atmore. “We’ve got some young people here and you should worry about it more. The debt of this country is the biggest we’ve ever had, and we are on a road to financial destruction. A lot of our biggest banks are still not in good shape.”

Shelby, who was voted in for his fifth five-year term in November 2010 and earned 69 percent of Escambia County’s votes, shared with the crowd of more than 30 on hand the rapid increase in national debt dating back to the early 1900s when he said the country’s debt was $1 billion. In 1980, it had climb to $909.041 billion before jumping to $3.206 trillion in 1990. Since, the national debt has more than quadrupled with a current debt of $13.5 trillion more than twice the $5.628 trillion debt in 2000.

“That’s financial destruction,” Shelby said. “If you care about this country and you care about your grandchildren, and I know you do, this is the No. 1 issue facing our country. Now there are others, but we can’t sustain it. I’m willing to do the tough thing, but we don’t have a majority to do it.”

Shelby said that at the rate of current government spending the national debt will exceed $25 trillion by the year 2020. He added that a constitutional amendment to mandate a balanced budget would help prevent such spending.

In 2011, Shelby said the Obama Administration is budgeted to spend $3.5 trillion with the country only bringing in $2.2 trillion.

Shelby believes the country can save time and money if each government entitlement program such as Medicare, Food Stamps, Social Security and Unemployment are examined “thoroughly” to ensure adequate funding is made available and no funds are being wasted.