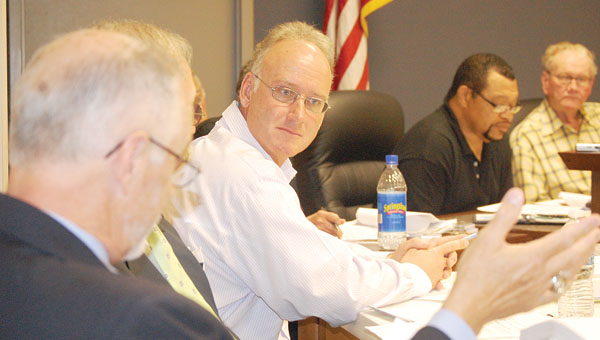 Conecuh County Commissioners heard from two engineers on Monday with one engineer giving the landfill a passing grade and the other giving it a failing grade.|Photo by Kerry Whipple Bean

With a week to go before their vote on the proposed Conecuh Woods Landfill, Conecuh County commissioners on Monday heard from two different engineers — one of whom, hired by the county, gave the proposal a passing grade and another, hired by an anti-landfill group, who failed the project.

County attorney Richard Nix conducted the work session and asked nearly all of the questions, seeking information from the engineers about their differing opinions. Commissioners are set to vote on the project at a special meeting at 9 a.m. Monday.

Engineer Hal Wood, hired by Citizens for a Clean Southwest Alabama, said there were criteria that should have excluded the project from the outset, including the fact that the landfill site is located inside a seismic area that has seen earthquake activity in recent years.

But engineer Dale Story said many of the concerns raised by CCSA’s engineer would be answered by further reports conducted by or submitted to the Alabama Department of Environmental Management.

Wood gave the project a 20; Story scored it at 37. A 28 is considered passing, but commissioners are not bound to approve a landfill application just because it receives a passing grade from an engineer.

Among the concerns raised by the engineering reports:

• Wood noted that the project is in a seismic zone.

Story said ADEM will require a seismic study as part of its application process.

• Soil types at the site are not suitable for what is known as “final cover,” used when a disposal cell is full. Story said the soil is not appropriate for final cover or for the clay liner, but it could be imported.

“They could import the soil from elsewhere,” Story said. “That’s a business and economic decision to be made by the applicant.”

Wood said the soil is not appropriate for daily cover or for final cover, and an “alternate daily cover” — which he said is basically a tarp — would increase the leachate and odor at the site.

Developer Jimmy Stone said he does not think there is a problem with the soil types.

“All of our information is that the material can be used for daily cover,” he said.

• With wetlands part of the site, Nix asked the engineers how that could affect the project.

“The primary concern with wetlands is that they not be destroyed,” Story said. “In terms of landfill design, they would need to stay far enough away from the settling ponds and landfill disposal area. But you design the footprint so you don’t encroach on that area. There is a minimum of 100 feet, but 200 feet is better.”

“I would be surprised if they didn’t make changes because of the floodplain and wetlands,” he said.

Wood said his concern about the wetlands remained that it should be an exclusionary criteria that would prevent the landfill application from going forward.

• Story and Wood also discussed the landfill’s effect on groundwater and how it would be monitored. Story noted that ADEM will require a plan to mitigate leaks as well as wells to monitor the groundwater and possible contamination.

But Wood said ADEM’s regulations are based on “risk management” rather than forcing repairs.

“By the time the statistical analysis is done, he said, “the leak has already made it to the wetlands or the creek. The damage has already been done.”

Conecuh Woods attorney Al Agricola said that would be an issue with ADEM’s regulations. “But this body has to make a decision before it gets to ADEM,” Nix said.

• In his report, Wood said the landfill site could be home to the red hill salamander, an endangered species. But Story said ADEM would require a study to determine that, and maps show the known salamander habit is located 10 miles north of the site.

“Based on the information provided, it should not be a problem,” he said. “But it could be a dealbreaker.”

• The engineers also discussed the potential treatment or redistribution of leachate at the site. Conecuh Woods’ application states that it could take it off site or redistribute it.

“That was one of our concerns,” Story said. “They did not identify where they could take it.”

Wood said recirculating the leachate, one of Conecuh Woods’ proposals, could increase the odor at the site.

“Generally, it is a procedure that is one when someone does not have the resources to treat it,” he said. “Generating more landfill gas is a consequence.”

Conecuh Woods officials have said that landfill gas could attract new industries to the area.

“There are places where landfill gas is used,” Story said. “It requires an industry that can use that type of gas. It is an expensive way to go.”

• The engineers also discussed discrepancies in the number of households located near the site. Story counted 19 households, based on a Google map search. Wood counted 62, based on a survey done by members of the CCSA.