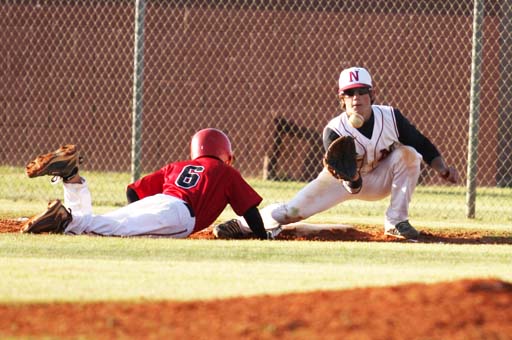 Northview first baseman Dabney Langhorne attempts to get a West Florida Jaguar out in a pickoff play earlier this season.|Photo by AJ Beachy

The Northview Chiefs baseball team had a rough outing on Monday when they hosted the W.S. Neal Eagles in Bratt, Fla.

The Chiefs fell behind early and could never find enough rhythm to come back as the Eagles posted a 10-2 victory.

In the first inning, the Eagles grabbed control of the game by scoring four runs with Hunter Mullins, Damion Williams, Michael Johnson and Brian Settle all crossed home plate.

After the Chiefs were held scoreless in their first at-bat, the Eagles went back to work and scored one more run with Tyler Sawyer giving Neal a 5-0 lead.

Following another scoreless inning by the Chiefs, the Eagles picked up two more runs giving them a seven-run cushion with Christian Purvies and Sawyer making it around the basepath and in the fourth inning, the Eagles pushed their lead to 10 runs with Settle, Logan Williamson and Dylan Godwin each scoring.

The Chiefs finally put a run on the scoreboard in the bottom of the fifth inning to keep from losing to a 10-run rule when Austin Arrington reached on an error and was knocked in on a sacrifice by Brandon Sheets.

Trailing 10-1, the Chiefs kept the Eagles off the scoreboard in the top of the sixth and added a run of their own in the bottom of the inning with Rigby pulling Northview within eight runs.

A scoreless seventh inning kept the score at 10-2, which is where it stood after Northview was unable to come back.

Escambia Academy Cougar Keaton Maher takes a cut at a pitch during his team’s victory over the Northview Chiefs earlier... read more