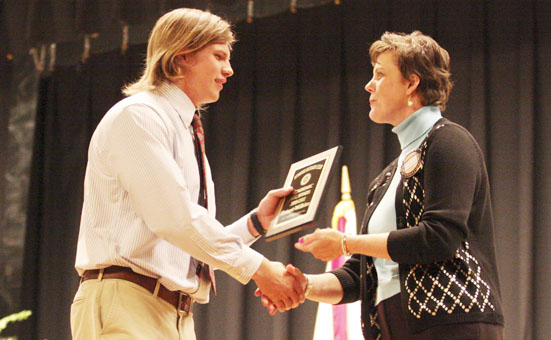 More than 100 high school students received recognition during the 26th annual program with more than $18,000 in scholarships being awarded. To be named an Academic All-Star, it is required that students maintain an A or B average in each subject for each grading period of the school year, with at least one A for each grading period.

“We are very happy with how well the entire program flowed,” Clayton said. “The Rotarians all worked together and produced a smooth program, and Tray Smith, our featured speaker, was interesting, timely and well received by the audience.”

Smith, a 2009 graduate of ECHS and a student at the University of Alabama who has always expressed political aspirations, first addressed those on hand with some political humor.

“I must begin tonight with one very clear announcement, and I hope that no one will be disappointed – I will not be a candidate for mayor of Atmore in 2012,” Smith said.

Smith, who was an editorial columnist for The Advance while in high school, also spoke of his experiences reporting on devastating tornado that ravaged north Alabama last week, including the college town of Tuscaloosa.

“As you probably know, the city of Tuscaloosa, where I live on the campus of The University of Alabama, was hit by a very bad tornado last Wednesday,” he said. “I drove in from Tuscaloosa this morning, after spending the last week reporting on the tornado’s aftermath for ‘The Crimson White,’ the University newspaper. The level of suffering has been tremendous; but the spirit of the people of Alabama has been strong. I know many efforts to send relief supplies and volunteers have begun in Atmore and Escambia County, so thanks to all involved. Your contributions are needed and appreciated; please keep Tuscaloosa in your thoughts and prayers.”

Smith also commended the Rotary for their efforts in awarding students that excel in the classroom and spoke highly of his hometown.

ECHS senior Ky’Toria Lawson was the recipient of the Randolph B. Luttrell Sr. Rotary Club Memorial Scholarship in the amount of $2,000.

Scholarships for the Academic All-Stars program were raised by the Rotary Club’s Fiddlers’ Convention and program ad sales.