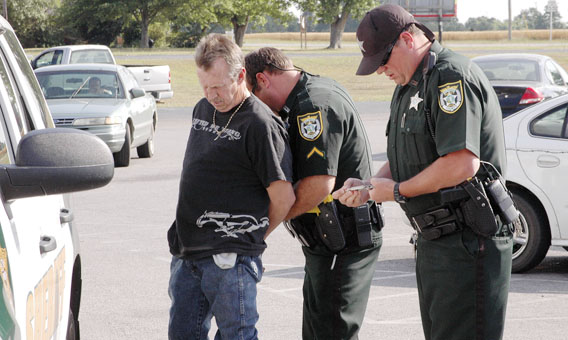 Deputies with the Escambia County, Fla. Sheriff's Office place Atmore resident Gary Smith under arrest for allegedly shooting Rodney Johnson Jr. of Century, Fla. Sunday afternoon at the Davisville Piggly Wiggly, while a deputy unloads the small-caliber pistol believed to have been used in the shooting.|Photo by Adam Prestridge

Gary Winston Smith talked on his cell phone next to his Mustang outside of the Davisville, Fla. Piggly Wiggly Mother’s Day afternoon waiting on sheriff’s deputies to arrive.

The 57-year-old Atmore resident was patiently awaiting his arrest after allegedly shooting 45-year-old Garland Rodney Johnson Jr. of Century, Fla. during an argument in the grocery store’s parking lot, located off Hwy. 97.

Escambia County, Fla. Sheriff’s deputies arrived 15 minutes following the shooting with weapons drawn and Smith immediately tossed his hands up into the air, placed them behind his back and was handcuffed.

“That man’s a soldier,” an eyewitness, who asked to remain anonymous, said outside the grocery store. “He shot the guy in the parking lot and just waited on the police to show up. He’s taking it like a man and owning up to it.”

During Smith’s arrest, deputies also confiscated a small .22-caliber Derringer revolver laying on the ground believed to have been used in the shooting. Smith could be heard assisting deputies in unloading his weapon by walking them through it verbally with instructions.

After Smith’s arrest, deputies entered the grocery store, which had be on lockdown until authorities were on the scene, to check on Johnson’s condition. Customers inside the store then began filing out.

Witnesses said that Johnson pulled into the parking lot in his Nissan Altima, parked and approached the sidewalk to the grocery store near where Smith’s silver Ford Mustang was parked, which he was standing beside. Witnesses said the two began to argue and Smith fired a shot from the small revolver. Johnson then walked inside the store holding his stomach and bleeding from the gunshot wound and employees called 911.

Personnel with LifeFlight airlifted Johnson, who was shot in the abdomen, from the scene. According to police reports, the bullet also exited through Johnson’s back entering the busy parking lot. He is currently recovering from his injuries at Baptist Hospital in Pensacola, Fla.

According to family members on the scene at the time of the incident, the shooting was the result of an ongoing feud between the two white males over a woman.

Smith, a resident of 1027 Rockaway Creek Road, was charged with one count of second-degree aggravated battery with a deadly weapon, a felony, in connection with the shooting. He was released from the Escambia County Jail Monday morning on a $10,000 bond.

The shooting remains under investigation by the Escambia County, Fla. Sheriff’s Office.

Personnel with Atmore Ambulance and the Walnut Hill Volunteer Fire Department also assisted on the scene.

NALC to collect food this Saturday