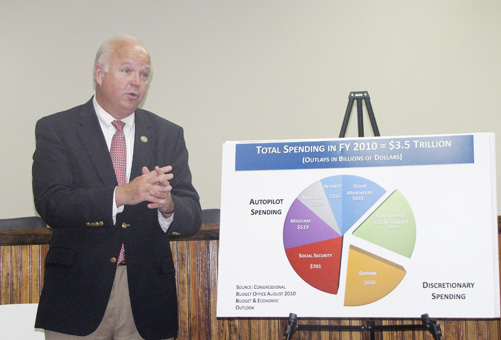 Congressman Jo Bonner did not bring good news to Escambia County on his visit to Atmore Wednesday morning.

He brought, instead, what seems like dire news regarding the state of the national debt.

“I have some bad news for you,” he said. “Our country is broke. Right now we are $13 trillion in debt and that is a lot of money. In order to solve the problem, everybody is going to have to have an honest conversation and make some sacrifices.”

In an effort to give an idea of just how large an amount the national debt currently is, Bonner explained that a person could borrow $1 million dollars a day for 3,000 years before hitting the $3 trillion mark.

Programs considered under mandatory spending include Social Security and Medicare/Medicaid. In his explanation, Bonner said cutting those programs simply isn’t an option.

“We can’t touch some of the funds, such as Social Security, but we have to realize that if we don’t do something now, money is going to run out sometime in the near future,” Bonner said. “We didn’t get to where we are overnight and we won’t get out of it overnight, but we need to address the issues now instead of waiting until some time in the future.”