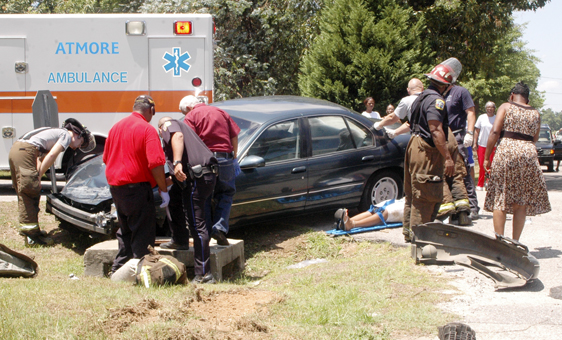 One person was injured in a two-vehicle accident today at the intersection of Carney and Owens streets Friday.|Photo by Chandler Myers

An Atmore woman suffered minor injuries following a two-vehicle collision that occurred just after 1:30 p.m. Friday at the intersection of Carney Street and Owens Street.

According to witnesses at the scene, the woman, whose name has not been released, was traveling west on Owens Street in a green Chevrolet Lumina LS. She stopped at the stop sign, but then pulled into the path of a 2004 white Chevrolet Silverado driven by 16-year-old Derrick Daniel of Perdido.

“I saw her coming and was like, ‘I hope she stops’,” Daniel said. “She stopped, but then pulled out hitting the side of my truck.”

Upon impact, Daniel’s truck, which was traveling south on Carney Street, veered to the right striking a water valve top causing it to rollover twice and end right side up in the middle of the street.

“I then climbed out of the window to see if everyone was OK,” Daniel said.

Daniel and his passenger, 18-year-old Taylor Harrington of Robertsdale, were evaluated at the scene, but refused medical treatment.

According to Harrington, the couple were in Atmore to meet friends for lunch and go swimming to celebrate the beginning of summer break.

The cause of the accident remains under investigation.

The condition of the Atmore woman was unavailable.

Public swimming will begin on Tuesday, May 31 when the Tom Byrne Park pool opens. The first session of swimming... read more