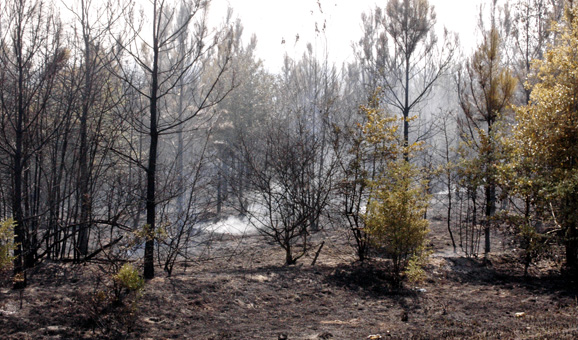 A spark from a blown tire is believed to be the reason more than a thousand acres were burned or scorched by fire Thursday putting countless firefighters to work through a large portion of Escambia County.

Fire departments from across the region were summoned to help in the blaze that kept firefighters busy throughout the afternoon and into the evening Friday.

“The big fire we ended up with came from four separate fires,” Adams said. “We believed that one fire was started by a blown tire from a truck on the road. After tracking the location of the fires we believe that each of the fires was started from the same vehicle.”

Adams said 20 fire departments responded to the fire that engulfed an area that took more than eight hours to bring under control.

Responding personnel came from Escambia, Baldwin and Monroe counties as well as Escambia and Santa Rosa counties in Florida, Adams said. Forestry personnel from Alabama and Florida were also involved in fighting the blaze.

Although the fire was contained and most personnel had left the burn zone before midnight, Adams said there were workers on the scene throughout the night and into Friday.

Adams said although forest and individual landowners lost timber, no property was damaged in the event.

“With all the area involved in the fire we are lucky to not have had any property damage,” Adams said. “We did advise a few homeowners to evacuate because of their proximity to the affected area. Some evacuated and some didn’t. Luckily it turned out well. That alone would make me call this event successful in protecting life and property.”

Adams said forestry personnel remained on the scene throughout the evening and into Friday with tractors and planes flying above the burn zone to monitor the area.

Although the main danger of the fire is over, Adams said there will be some concerns for days to come in the area where the blaze occurred.

“We’re going to see smoke in the area for days to come,” Adams said.

“The fuel that fed the fire will continue to smolder for days to come. Until we can get some rain or the fuel is just used up, there is going to be continuous smoke in the area. We are cautioning those who live or drive in the area to be aware of the situation and be mindful of safety.”

Wildfires have burned up more than 400 acres in between Atmore and Flomaton with firefighters continuing to battle five blazes... read more