YMCA to get facelift 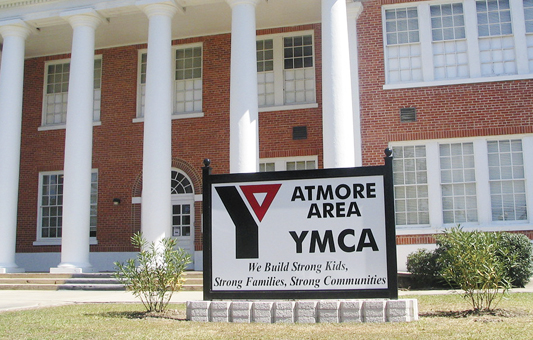 The Atmore Area YMCA has signed a contract to have renovations done to the building including new windows, new doors, painting the outside of the building and the removal of lead paint.|File Photo

Operating in the first Escambia County High School building is something that the Atmore Area YMCA has done for the last several years.

The old high school was built in 1926 and eventually became the Atmore Lions Club Community Center in 1989. A 2004 donation of the property made the YMCA owners for the building they call home.

With an 85-year-old building, it is understandable that some work is needed to upgrade the interior and exterior of the facility.

A portion of a $150,000 donation to the YMCA from the Poarch Band of Creek Indians has been earmarked to help with those upgrades.

Ross Terry, manager of the Atmore Area YMCA, said the money is going to help fund several projects around the building.

““We’ve put a lot of money into renovations for the building before,” he said. “We are ready to have more work done now that we have the funds, and with this generous donation by PCI, we are going to be able to have several things done.”

Work around the building will include replacing doors and windows as well as painting the outside of the building.

Terry said the focus of the work for the first phase of the project will be maintenance and/or bringing the facility up to standard codes.

“Windows have started to rot, so as a part of our first phase, we are taking out the rotted windows and replacing them with vinyl windows that look the same,” he said. “We are also putting in new metal doors in the back alleys as well as the fitness center that meet fire codes. Outside, we are going to paint the front of the building to make it look nicer.”

Making the building more appealing for the community, as well as YMCA members, is a focus that the staff and Board of Directors see as a priority.

Allen Walston, president of the Atmore YMCA Board of Directors, said the building’s appearance is important for Atmore.

“I think it’s important to make the building look good because it’s a focal point of our community,” he said. “Also, it needs the upkeep for maintenance as well as efficiency reasons. Hopefully, this work will increase community and member use.”

A major project inside the building is the removal of lead paint.

With its contract, the YMCA looked to Maxwell Construction because of the company’s lead-paint certification.

Terry said removing the paint will be a project of importance.

“The building does contain lead paint, so our contractor is lead-paint certified,” he said. “They will have to build a barrier around what they are tearing out, take it down, replace everything and test it for lead paint before it is completed.”

With so much work to be done, the project could take several weeks, but the Terry said they hope to have the work done by October.

“We are hoping to have the work completed before Williams Station Day,” Terry said.

The YMCA is also campaigning for donations to help secure another $150,000 from PCI. If you would like to make a donation to the YMCA contact them at 368-9622.