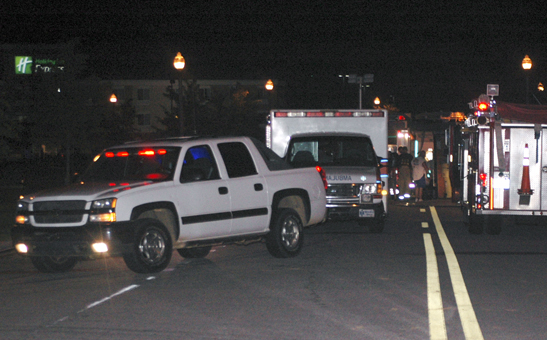 Emergency reponsders were plentiful Monday night at the Holiday Inn Express location at Rivercane along Alabama 21 just outside Atmore. |Photo by Chandler Myers

An emergency situation turned into an easy fix after the hazmat team from the Poarch Fire Department responded to a call Monday night at the Holiday Inn Express at Rivercane.

A caller called 911 at 8:21 p.m. on Monday to report a vapor leak coming from a factory truck that contained hydrochloric acid parked at the Atmore hotel.

The leak, which contained no liquid, was coming from the truck, while the driver was not working, Escambia County EMA director David Adams said.

“The driver of the truck was off-duty and not driving down the road,” he said. “The caller saw the vapor leak and reported it, so the hazmat team went down and fixed the leak as much as possible.”

Following the repair to contain the leak, the truck was moved away from the hotel with the main repairwork aimed at fixing the leak Tuesday.

Trucks such as the one with the leak do have a pressure release, but the repair on Monday was done that allowed the truck to avoide the use of the pressure release mechanism, Adams said.

Adams also said added along with ensuring the safety of the hotel, Atmore Ambulance was called in to assist and be on standby for members of the hazmat team.

“Just as a safety precaution, we had the truck moved away from the hotel,” he said. “These trucks do have vapor releases, but this will help the container not have to rely on that release. We also have Atmore Ambulance here to make sure that the hazmat team is OK. Anytime there is a situation such as this, it is always necessary to check them when they are coming out of the incident.”

The Escambia Academy Cougars are preparing to field the largest team they had since Heath Gibson has been head coach... read more