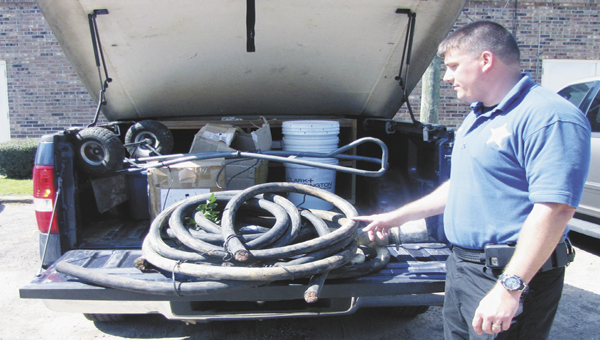 Agent Jerame Conn is hoping someone can identify the hoses law enforcement officers believe was stolen in the Atmore area.

When local law enforcement agents received a call reporting a vehicle traveling over 100 miles per hour Friday afternoon, they were not expecting to find what they now believe to be the recovery of thousands of dollars of stolen copper.

Jeremy Conn, an agent with the 21st Judicial Drug Task Force, said law enforcement agents were contacted by officials with Fountain Correctional Facility, who reported a Ford Mustang traveling at high rates of speed southbound on Alabama 21. Conn said Fountain officers made contact with the driver when the car pulled off the road to meet a truck driven by Craig Sims.

Conn said Sims, who lives north of Atmore, has an extensive history of theft and drug related arrests and officers immediately noticed suspicious material in his truck, including tubing containing a large amount of copper wiring. Conn said Sims claimed he had come upon the tubing honestly, but did not have an explanation for a lock that had been cut from a recently burglarized building in Atmore.

“Someone broke into the old location of Plains on Butler Street,” Conn said. “(Sims) had the lock in his cup holder. He couldn’t explain that.”

Conn said Sims also admitted to officers that uses methamphetamines and had smoked meth as recently as Thursday night.

Sims was taken into custody and charged with burglary, criminal trespass in the second degree and criminal mischief as a result of his connection to the break in, but Conn said he could face heftier charges if the Sheriff’s department can find the owner of the tubing they believe was likely stolen from an oil rig or similar machine.

“We don’t know who this belongs to, Conn said. “But if someone can identify this as theirs, then we can charge (Sims) with receiving stolen property in the first degree, which is a high felony charge.”

Conn said Sims is also a suspect in an investigation related to another break in at the old Plains location in mid September, during which a golf cart, steel exhaust pipes and other materials were stolen.

Conn said the value of the unclaimed tubing found Friday was likely in excess of several thousand dollars.

The driver of the car first identified by officers received a traffic citation, but is not believed to be connected to the burglary or thefts.

Anyone with any information is asked to call the Escambia County Sheriff’s Department at 251-867-0304.