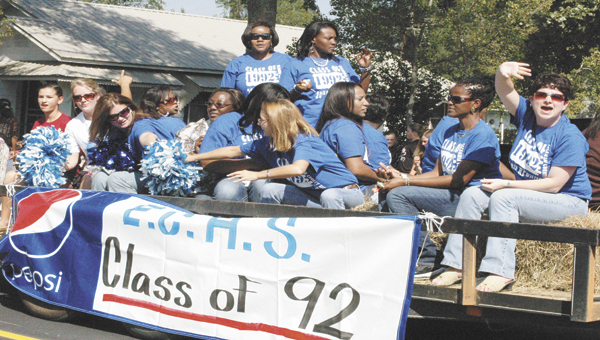 Members of the ECHS class of 1992 participate in the 2012 homecoming float prior to the Blue Devils game against Monroe.

Atmore was buzzing Friday as students all over town got out of class at noon in order to prepare for the 2012 homecoming game between the Escambia County High School Blue Devils and the Monroe County Tigers.

But students were not the only people excited about the game. Former ECHS students also got in on the fun as members of classes that graduated in years ending in “2” piled into town to take part in the festivities. From building floats and participating in the annual homecoming parade, to organizing tailgating parties for the day’s big football game, ECHS grads were busy all day Friday.

Graduates also participated in a homecoming tea held Friday at ECHS, where principal Zickeyous Byrd gave them a tour a facility where they once spent a lot of time, but for some, have not been back to in years.

The grand finale came Friday night when the ECHS Blue Devils tangled with the Tigers of Monroe County at Herbert Barnes Stadium.

Following the game, students met back in the gymnasium for a dance.