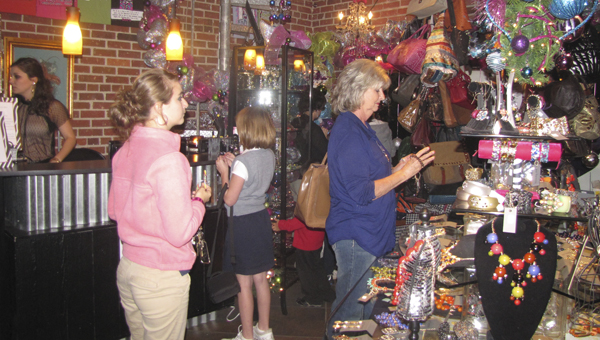 This year’s Jingle Bell Walk, sponsored by the Atmore Area Chamber of Commerce, led shoppers on a trip through Atmore’s downtown district Thursday night that exposed them to sales on everything from jewelry and clothing to collegiate memorabilia and hidden treasures sold by locally owned and operated businesses.

Shoppers not only found great deals during this year’s event, but were also treated to the sounds of the Escambia County High School Choral Group and tasty treats at both The Roasters Gallery and The Coffee House, both located on Ridgeley Street.

“It was a good night,” Vickery said. “It wasn’t as large of a crowd as we have had in the past, but there were other things going on in town.”
Vickery said businesses participating in this year’s event reported good numbers, as shoppers took advantage of the sales.

“A girl who works at the Tot Shop said they had a really good crowd,” Vickery said. “She said it was the busiest she has been since she started working there.”