Huge crowds turn out for parades 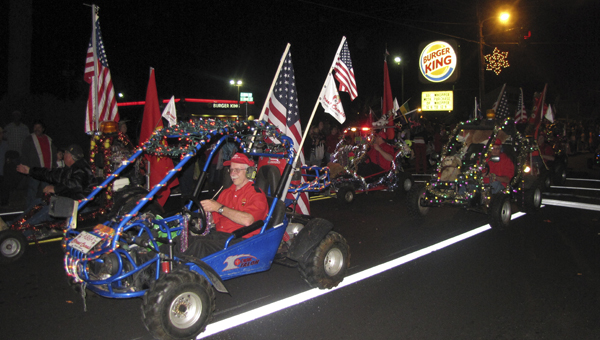 The lights were bright and the details were spectacular as The Poarch Band of Creek Indians and the Atmore Area Chamber of Commerce held Christmas parades Friday and Saturday nights respectively.

The annual PCI parade drew a large crowed Friday while the 2012 Atmore Parade attracted quite a crowd to it’s event Saturday.
In Atmore, improved float designs were a noticable aspect of the parade.

“The quality of the floats is getting better,” Atmore Chamber of Commerce Director Sheryl Vickery said. “Every year it just seems they’re getting better. There were thousands of people there. It has become bigger and better every year.”

Shelly Williams, also of the Atmore Chamber of Commerce, said the parade is always high quality because of the numerous participants. As a specific example, she noted that fire departments from all over the area come to participate in the parade, such as the Uriah Fire Department and the Nokomis Fire Department.

“We always get support from area fire departments,” Williams said. “They’re just from all over. All the floats were great. We can’t have a parade without participants.”

Back again this year was the popular character Tillie the Turtle, especially popular with children.

About a year ago, the Escambia County Commission, the Atmore Chamber of Commerce and others began a campaign to teach kids and parents the importance of not littering. Tillie became a sort of unofficial mascot for the campaign.

Vickery said she was pleased to see this year’s parade continue a long tradition of well-received parades in Atmore.

“I compare this parade to other towns, really, other cities,” Vickery said. “I just think this parade has such a reputation, a great reputation. I think everybody enjoyed it. It was just a wonderful day.”

Awards are given every year and this year was no different. The top award, the “Ahh!” award, was given to the Atmore Community Hospital float. The top award is based on several different judging criteria, but one of the primary factors is interpretation of theme. This year’s theme was

“Christmas around the world.”

The Judges’ Choice award went to the float of Jus Because. The float was remarkably tall, mimicking the shape of the actual Jus Because building lit up with lights that read “Shop Local,” while employees tossed candy to children from two points at the top of the float.
The Peoples’ Choice Award went to the float known as PCI No. 1 float. PCI entered their three top floats from their popular parade held a night earlier on the reservation and their float that featured the Norwegian flag and Viking costumes took home the award.
The Most Inspiring award went to Brooks Memorial Baptist Church.

Northview running back La'Mikal Kyles was a big factor in the Chiefs first ever state championship win Friday night in... read more