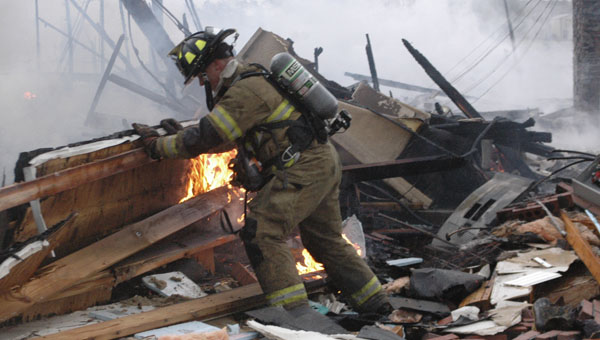 A fire destroyed a home in McCullough Thursday afternoon.

What was described as “an explosion” resulted in the total loss of a home on McCullough Road this afternoon and mildly injured one resident.

According to Marcie Brewton, her father John sustained burns to his forearms when he attempted to enter his burning residence, where two family pets were located.

“He opened the back door, but when he did, it blew him over the chain link fence,” Marcie said, pointing to the area behind an L-shaped portion of the home.

Marcie said it was a blessing from God that her mother, Elaine Brewton, was not killed in the blaze.

“On any other day she would have been there,” she said. “My daughter was at the kidney doctor and we decided to go ahead and go get her driving permit so she wouldn’t have to miss another day of school. I called mom and she said, ‘I’m not going.’  I called her a little later and she said, ‘I’ll go, but I don’t feel like it.’”

Marcie said had her mother not changed her mind, her family would be mourning more than pets today.

“We had been at the doctor about an hour when someone called and told us,” she said. “If mom had been here she’d be laying in the grass out there.”

For at least twenty feet in any direction around the home, glass, bricks and other debris littered the ground. In a back garage area Marcie’s SUV could be seen charred amidst the other rubble.

“We decided to take her little bug,” she said. “We’re just so blessed.”

Elaine said her home, a more than 3,000-square-foot structure built in 1999, didn’t have any problems that would have caused the blast that she was aware of.

“The other day my husband said he smelled something that he thought was a dead rat,” she said. “But that’s all.”

Elaine said she’s just happy her daughter called when she did.

Officials with the state fire marshal’s office were on the scene of the fire, as were fire fighters with the Poarch, Atmore and Nokomis fire departments, but officials said an investigation into the cause of the fire would not be able to begin until the smoke and weather cleared.

For more on this story, see the Saturday, April 13 edition of The Atmore Advance.