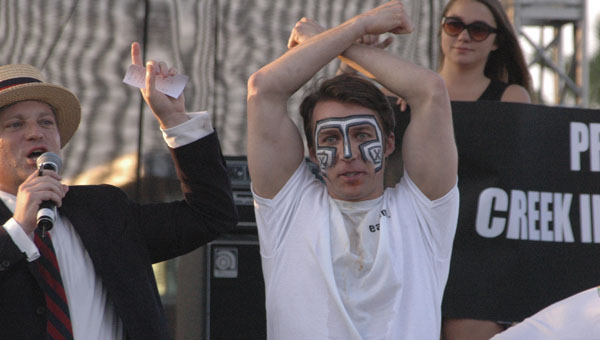 “I thought we’d do more,” Janus said of the open-faced dish of fry bread adorned with meat, lettuce, cheese, salsa and sour cream. “I thought it would be a little easier.”

Thomas said she could’ve eaten 40 dozen oysters, but they kept sticking to the shell.

“That’s why I slowed down,” she said.

Thomas holds the world record for oysters with 47 dozen consumed in eight minutes.

Barclay said he was surprised by Thomas’ performance with the oysters, as she was on pace to smash her world record. She was on pace to eat 58 dozen oysters if the contest had lasted eight minutes.

In an amateur battle of Wind Creek Casino executives, General Manager Arthur Mothershead won $5,000 for St. Jude’s Medical Center when he polished off 11 tacos, which would’ve been only half a taco less than sixth place among those in the professional ranks.

Mothershead said he didn’t really have a strategy going into the competition mainly because he waited too long to search for competitive eating tips.

“I just finished what was on the plate,” Mothershead said.