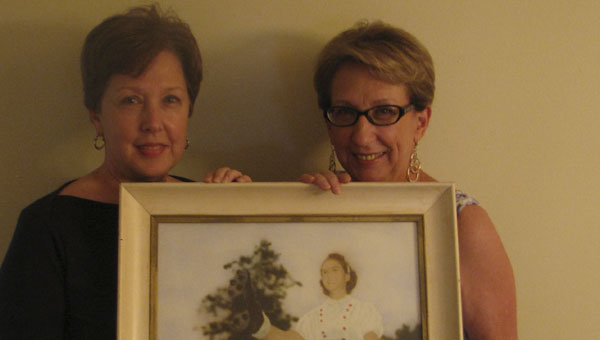 Atmore native Luverne “Toad” Wise Albert didn’t shy away from a challenge put forth by Escambia County High School coach Andy Edington and became one of the Blue Devils’ kickers for the 1939 and 1940 seasons.

The story goes that she and nine other girls came up to the coach during practice one day and said they were bored, said Albert’s daughter, Susan Moorhead. He told them to come to practice and if they were good enough he’d put them on the team.

“She was the only one who went through with it,” Moorhead said of her mother.

Moorhead and sister Toni McMurphy said their mother made the team as a kicker, despite never having kicked before.

“She was probably just an old country girl who ran around in her bare feet all the time,” Moorhead said.

Edington did have one rule though, she could only come in to kick extra points if the team was up by 20 points or more.

“They had a really good male kicker,” she said. “That’s why they had such good years because the guys wanted to see her in the game.”

That might be true. ECHS lost only one game in two years with Albert on the team.

Despite the accolades and media attention that such a feat garnered, Albert never talked about it much to her daughters, Moorhead said.

“She had her uniform,” she said. “We used to play dress up in it. We knew she had it and she played football in it, but we didn’t know it was unique.”

The sisters still have their mom’s uniform and a pair of cleats she wore as well as a scrapbook and countless write-ups in various periodicals.

It wasn’t until later that the women realized the significance of what their mother accomplished. Moorhead said she believes her mom was the first female football player in the country.

“It is inspirational,” Moorhead said. “You don’t have to be a cookie-cutter mold of what everybody wants you to be. If there’s something you want to do, be confident and do it.”

Albert made news around the country with spreads in Sports Illustrated, The New York Daily Mirror and Life magazine.

Unfortunately the story of Albert’s accomplishment, which was big at the time, “doesn’t mean anything now” years after her death in 1982, Moorhead said. She added that she enjoys telling the stories of her mother and thinks that they’re good for Atmore.

“I think for a town like Atmore – this is something that doesn’t happen everywhere – I think it’s something to be proud of,” Moorhead said. “She (Albert) wouldn’t want any glory from it. It would just be for Atmore.”

Albert, who got her nickname “Toad” from a family friend because she had freckles as a child, was inducted into the Atmore Hall of Fame in 2011.

Remembering businesses of long ago