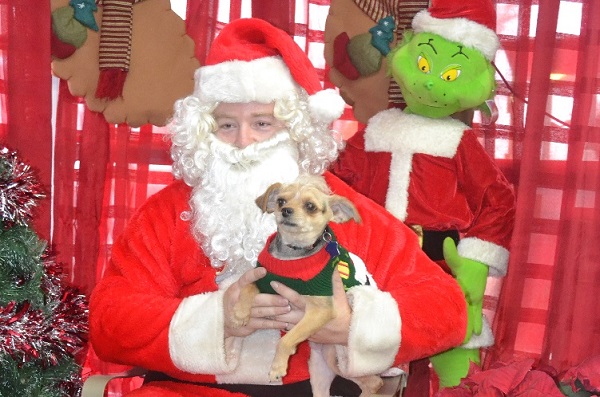 Santa Claus (played by Barry Sumrall) makes sure that Paughco was a “good boy” before taking his photo at K-9 Cleaners’ “Santa Paws” fundraiser Saturday morning.| Photo by Justin Schuver

Santa Claus might not be used to getting bones and squeak toys for present requests, but that’s probably exactly what he heard Saturday morning in Atmore.

K-9 Cleaners, located at 1410 E. Nashville Ave., hosted its second annual “Santa Paws” fundraiser, which helps raise money for the Atmore/PCI Animal Shelter. For a small fee, pet owners could have their dogs (or dogs and owners) take a photo with Santa. All proceeds benefited the animal shelter.

“I thought it was hard to get kids to look at the camera, but dogs are even more restless,” said Barry Sumrall, who donned the jolly old elf’s clothes for the event.

Animal shelter manager Susanne Sirmon said the shelter would use the proceeds from Saturday’s event to buy important items for the shelter animals, including vaccinations.

“K-9 Cleaners does a lot for the shelter throughout the year and this is a very special event for us,” Sirmon said. “I don’t know what we’d do without them.”

K-9 Cleaners owner Kathryn Sumrall said the Santa Paws event is an opportunity to see shelter animals get a second chance at life.

“A lot of the photos that we take are photos of former shelter animals,” she said. “It’s wonderful to see them come back with their new families. It gives us motivation to continue helping the shelter however we can.”

For more photos and coverage of this story, see the Wednesday, Dec. 11, edition of The Atmore Advance.