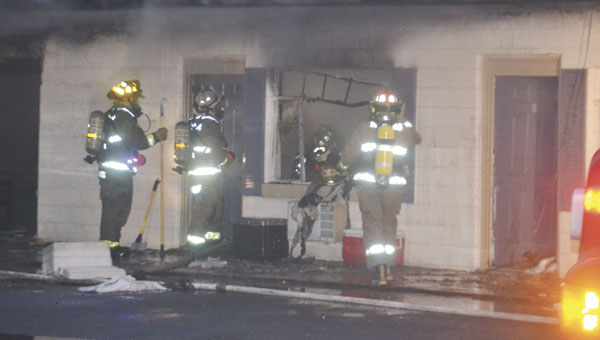 Firefighters make sure the flames are out in one of the rooms Saturday evening.|Photo by Justin Schuver

A massive fire engulfed the Southland Motel on U.S. Highway 31 in Atmore on Saturday afternoon, and authorities are unsure what may have caused the large blaze.

The fire began at 3:58 p.m., as flames made their way through many of the structure’s rooms, forcing the hotel’s residents to quickly leave. There were no major injuries, Atmore Fire Chief Gerry McGhee said.

Firefighters from a variety of local departments responded to the scene, including Atmore, Flomaton, Poarch, Walnut Hill and Nokomis. The Atmore Police Department also reported and helped to control traffic around the roads. Most of the east-west Highway 31 traffic was detoured while firefighters battled the strongest part of the flames.

McGhee said that firefighters were on site until about 9 p.m., but had to return at 2:58 a.m. Sunday morning when the fire re-started. Firefighters left the scene of the second blaze at about 5 a.m. Sunday.

McGhee said Tuesday afternoon that officials from the State Fire Marshal’s Office investigated the site Monday and Tuesday, and that the cause of the fire is still “undetermined.” He said it is unclear where the fire actually started, but he believes it was somewhere in the rear of the hotel, furthest away from the highway.

Paula Foreman, of Marion, Ohio, was napping Saturday afternoon when she woke up to a “room engulfed in smoke.”

“I just got out as fast as I could,” said Foreman, who was visiting her boyfriend in Atmore.

Joan Hackman, branch manager for the American Red Cross, said the organization responded to those motel residents who were displaced by the fire. She said that many of the people staying at the motel were only there for a day or so, and were able to find later lodging in another town or with family members.

Some of those who lived at the hotel were able to find alternative lodging in town, she said. She also noted that several businesses, churches and individuals have already provided donations of food, shelter and clothing. 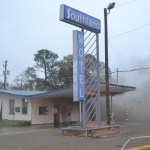 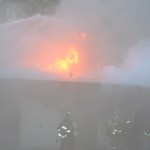 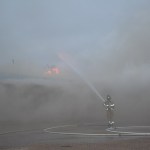 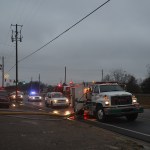 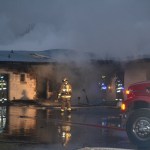