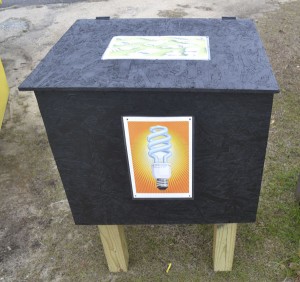 Citizens can safely dispose of their compact fluorescent bulbs at this drop-off box in the city recycling center.

Atmore residents who have been using compact fluorescent light bulbs (CFLs) now have a place to safely dispose of them.

The city of Atmore recently installed a receptacle for used CFLs at the city’s recycling center, next to Atmore City Hall. The location is clearly marked, with a black wooden box labeled with a picture of a CFL on both the side and lid.

CFLs are a modern style of light bulb that contains mercury, which can cause health problems if it leaks into the groundwater system. By disposing of CFLs at the recycling center, rather than simply throwing them away, citizens can avoid contaminating the environment.

The CFLs will likely become more prevalent in the U.S., after a Jan. 1 law went into effect that bans the manufacture of incandescent light bulbs. Consumers will now only be able to select from three styles of light bulbs — CFLs, halogen bulbs and light emitting diode bulbs (LEDs).

Scientists say that these three bulb choices save up to 80 percent more energy than incandescent bulbs, but each also has its disadvantages.

Halogen bulbs, which are similar to those used in car headlights, emit a large amount of heat and can cause burns to the skin. LEDs can cost up to $25 per bulb and sometimes do not emit bright light.

In addition to the mercury problem, CFLs are also typically about three times more expensive than similar incandescent bulbs.

After he was sworn in to the U.S. House of Representatives on Wednesday afternoon, Rep. Bradley Byrne (R-Ala.) announced that... read more