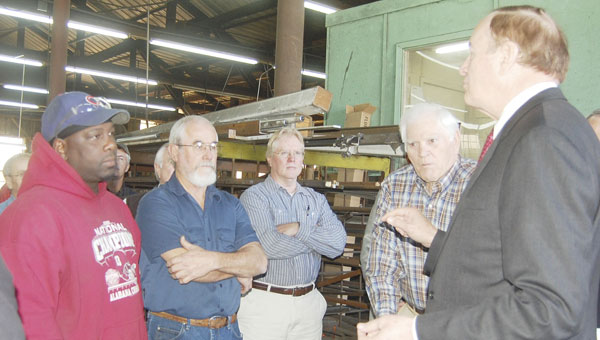 U.S. Sen. Richard Shelby talks with workers at the Brewton Iron Works during his Monday visit in Escambia County.

U.S. Sen. Richard Shelby (R-Ala.) said he decided to put a new twist on his 67 annual county visits back home, and is visiting a business in every county.

On Monday, he was at Brewton Iron Works, at Shaw in Andalusia, and at the hospital in Luverne.

“It’s good for me to come out, as a U.S. senator, to listen to their concerns,” Shelby said. “Sometimes bureaucrats in Washington or Atlanta come forth with rules and regulations, and they don’t know the business or what it’s doing to the business.”

Shelby said he likes to get a flavor of what’s going on.

“I try to go to every county every year, and I have for 28 straight years,” he said. “I decided to put a different wrinkle on it and go to businesses. What are their challenges? What do they need us to do? What is it we don’t need to do?

“A lot of people don’t understand — or don’t care enough in Washington — to find out.”

In Brewton, Shelby watched as Brewton Iron Works owner Earle Wilson celebrated the return of the company to his family Monday, during a signing ceremony attended by local officials and plant employees.

As of Dec. 31, Allied-Locke — which acquired part of the business in 2002 and all of it in 2006 — sold the company back to Wilson. Wilson’s grandfather, W.F. Wilson, managed the company in 1903 and was offered a partnership in the business seven years later.

The company makes ductile and gray iron castings for a variety of industries, including automotive, valve and pump, agricultural equipment, electric motor and paper.

A consistent theme Shelby heard in his visits throughout the state was the cost of energy, he said.

“We’ve found so much oil and gas in this country, if we could bring down the cost of energy, it would create a boon in manufacturing in this country. Not sure this administration knows that.”

Shelby said he would return to Washington on Monday after traveling Alabama this week. He was among the top Republicans handling the appropriations bills, which have passed, preventing another government shutdown.

“I’m hoping we can walk away from this ‘I gotcha’ mentality and work together,” he said.