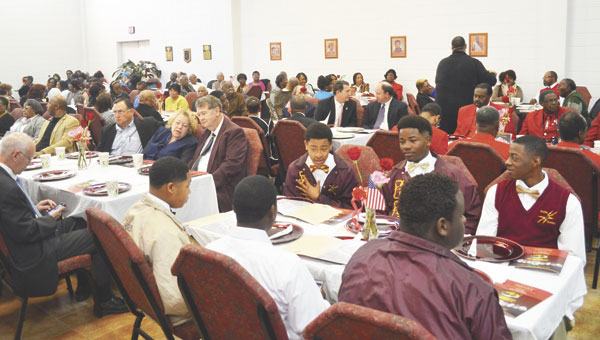 In his remarks, McBride noted that Rosa Parks was influenced by the writings of Confucius, a Chinese philosopher who lived more than 500 years before the birth of Jesus Christ.

“The statement that she felt impacted her the most was when Confucius wrote, ‘You’ve got to know when to say when,’” McBride said.

McBride noted that Parks’ refusal to give up her bus seat to a white passenger was one example of when it was finally time to “say when.”

Zickeyous Byrd, an educational specialist with the Alabama State Board of Education, served as the master of ceremony. Byrd is also a former principal of Escambia County High School.

“I count myself more than blessed to have the opportunity to
share this day with you,” he said.

While McBride recounted the story of Parks through the word, another speaker told the story through song and costume. 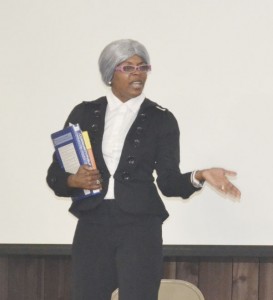 LaShanda Marshall recounted the story of Rosa Parks, with the help of costume and song.

LaShanda Marshall, a member of the Psi Omicron Omega chapter of the Alpha Kappa Sorority, dressed up as Parks and told her biography through a mixture of spoken word and songs.

“I was not physically tired,” said Marshall, as Parks. “I was tired of giving in.”

Marshall used several spirituals and songs, such as “Ain’t No Mountain High Enough” and “Victory Is Mine!” to add color to the history lesson.