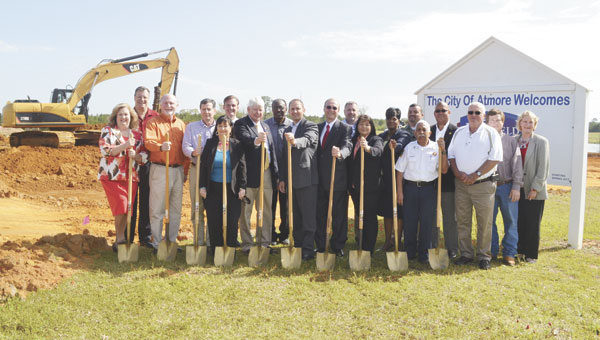 City and Chamber officials joined together for Tuesday’s groundbreaking ceremony.

The new, 79-room hotel could be completed by the end of the year or in early January 2015, Atmore Mayor Jim Staff said. It is located next to Holiday Inn Express, in the city’s Rivercane development near the intersection of State Highway 21 and Interstate 65.

Staff noted that Taco Bell could hold its groundbreaking later this month, as well. No date has been officially set for Taco Bell’s groundbreaking, but construction could start as soon as April 10.

“We’re hoping that they’re going to settle it the 9th and start building on the 10th,” he said.

Staff said Taco Bell has told the city that it only takes about 90 days to construct one of its restaurants.

Staff said city officials are excited about the visible progress at the Rivercane development.

“Anytime you see dirt being moved, it’s a great thing,” he said. “People in the community see that exciting things are happening. They’re excited because now they’ll have more options right here in town and not have to drive as far for some of their needs.”

Work is also continuing on the portion of North Main Street in front of Walmart, as the road is being widened to add additional turning lanes. As of Tuesday, one of the lanes of northbound traffic was closed.

City officials have estimated that the new Walmart will be open sometime in July.

Although nothing is official yet, the city continues to look for additional prospects for the Rivercane development. At Thursday’s meeting of the Atmore Industrial Development Board, realtors Tim Herrington and Mark Dauber said they receive calls every day from interested businesses, including a fast-food chicken restaurant.

By Stephanie Nelson For The Advance Saturday is projected to be a perfect day to volunteer at the Habitat for... read more