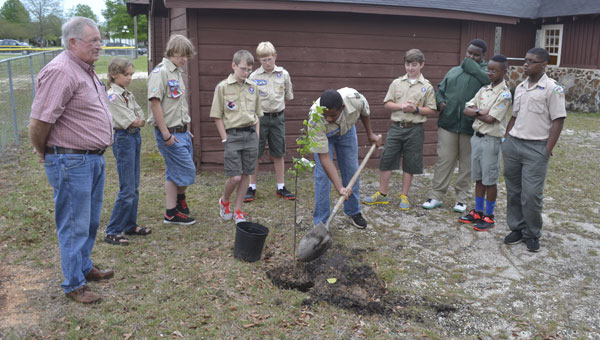 Members of Boy Scout Troop 26 helped improve the environment around their scout hut Monday evening, as they planted an Eastern redbud tree in celebration of Arbor Day.

The national Arbor Day is April 25, and it is designated as a special day for American citizens to plant trees in their communities. Several states hold their Arbor Day earlier in the year, because of the differences in weather and growing patterns.

Alabama’s Arbor Day is designated as the last full week in February.

Ed Brown, who heads the city’s beautification and parks, told the Boy Scouts that the sapling they planted was three years old, and would be fully grown in 10 years.

“It looks like a gangly little teenager right now, and that’s what it is,” he said. “But you’ll be able to come back with your kids and grandkids and show them the tree you planted years ago.”

Also present at Monday’s tree-planting ceremony was Todd Moseley, distribution line clearing specialist for Alabama Power. Moseley gave a forestry presentation to the Boy Scouts, which will help them earn credit toward their Forestry merit badge.

Atmore City Mayor Jim Staff read the city’s Arbor Day proclamation, and congratulated the Boy Scouts on their efforts to beautify the community.

Buster’s Restaurant was selected as the Atmore Area Chamber of Commerce’s “Business of the Month” for the month of April.... read more