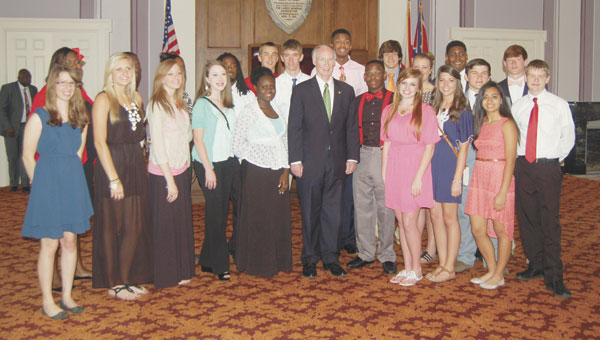 The 2014 Youth Leadership Atmore (YLA) class will celebrate its graduation Sunday, April 27, at 3 p.m., at the First Presbyterian Church in Atmore. This graduation will close out a busy year in which students learned about their city’s government, business and industry, justice system and more.

On March 5, the YLA students traveled to the Escambia County Courthouse in Brewton for the first portion of their criminal justice session. While they were at the courthouse, they met with Circuit Clerk John Robert Fountain, Circuit Judge Bert Rice, District Judge David Jordan and District Attorney Stephen Billy. The group learned about the role of the Circuit Clerk’s office and the functions of the Circuit and District Courts. They also heard about the process for jury selections and the role that the grand jury plays in the justice system.

After lunch, the group returned to Atmore and went to the Poarch Creek Indian Recreation Center. There they met with Escambia County Sheriff’s Deputy Denny Lambert and his canine (K-9) partner, Ajax. Lambert told the students about the continual training he and Ajax must go through, in order to work as a team. He also told them how the K-9 officers are trained. He gave two demonstrations — one that showed Ajax’s keen sense of smell in detecting the odors of narcotics, and another that showed Ajax’s ability to bite and subdue.

April 3 was the final session of YLA, as the students visited Montgomery for an up-close look at state government. Their host while in Montgomery was Escambia County representatives Alan Baker, Harry Shiver and Mike Jones.

Upon arrival at the RSA Plaza, the students had breakfast with Lieutenant Governor Kay Ivey. After Ivey welcomed the group and spoke about her role as lieutenant governor, the students took a walking tour of the state Capitol building. While visiting the old House of Representatives, YLA had the opportunity to meet Gov. Robert Brentley.

YLA then visited the State House, where they met with Baker and Shiver. The students observed the legislators debating a bill, and then returned to the RSA Plaza for lunch with Baker, Shiver and Jones.

After lunch, YLA went to the Alabama State Supreme Court Judicial Building. They were given a brief tour and met with Atmore native, Supreme Court Justice Lyn Stuart. She explained the role that the Supreme Court of Alabama plays in the justice system, and also shared some reflections on her time growing up in Atmore.
When the students finished their time in the judicial building, they headed for their last stop of the day, the Alabama Archives building.

This is the 19th class to graduate the YLA program. The YLA Steering Committee members are Stephanie Buitron, Deborah Daniel, Diann Matthews and Matt Rabren.

On behalf of the YLA students, the Steering Committee would like to thank the members of the community, the many businesses, educational institutions and government officials and agencies throughout the state that have supported YLA over the years.