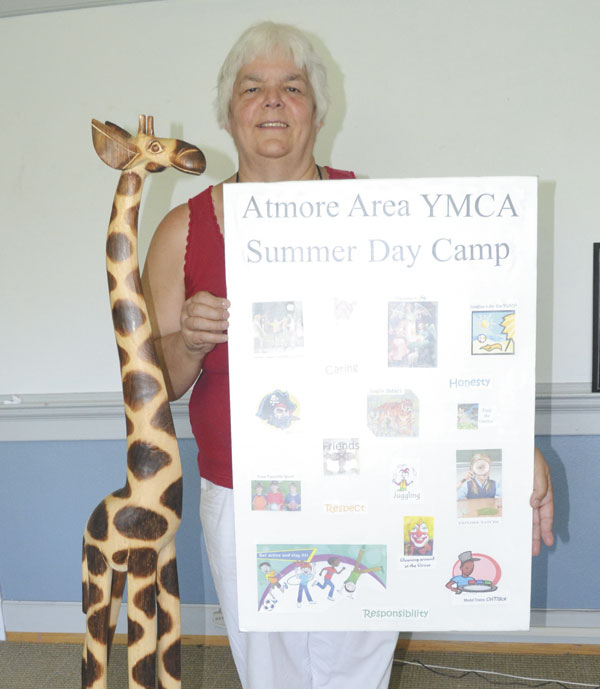 School might still be in session, but the staff at the Atmore Area YMCA is already working hard to be sure this year’s summer camp is entertaining, educational and exciting.

Donna Vile joined the YMCA staff on April 28, and will serve as the 2014 director for the summer camp. She has previously served as a teacher of 4-year-olds at MOPS (Mothers of Preschoolers), and in 2013 she was a “Rings of Character” group leader at Camp Horizon in the Baldwin County Wilderness Teacher.

Vile said she hopes that this year’s summer camp will be the best it’s ever been.

“My personal goal would be to help stretch the kids into some activities that they may have never done before,” Vile said. “We’ll probably give them the chance to act in a drama, do some science experiments, learn some new exercises — we’re going to make it fun and different every day.”

Vile said she was impressed by the variety of activities at the YMCA’s recent Healthy Kids Day, and hopes to offer a similar healthy focus during summer.

“We’re going to stay active and we’re going to be physically fit,” she said. “Hopefully every kid will be able to increase their endurance and speed and get in better shape by the end of camp.”

Summer camp will be for 55 days, starting on Monday, June 2, and continuing through Friday, Aug. 15. It will be for ages kindergarten through sixth grade. More information about the camp, including times and prices, will be available later this month.

Vile said that most activities will be held at the YMCA building, but there may be some small field trips that the kids will be able to walk to. She also said that they will likely have some community clean-up days.

While Vile is still working out the details of the camp’s curriculum, she has already selected her “mascot.” The mascot is a tall wooden giraffe and comes from a book that Vile saw at the local library.

In that book, the giraffe decides to race a creature called a “honky beast,” not realizing that it is an automobile.

“The giraffe is able to win the race,” Vile said. “One of the days of camp, I’ll read the story and then I’ll ask the kids to draw a picture of what they think the ‘honky beast’ might look like.”

Vile said the giraffe is a good mascot because it shows the kids that they can accomplish anything if they work hard.

She also plans to have the kids do a presentation every Friday during summer camp, where they can show the community what they learned during the week.

Also, Vile said she will welcome any volunteers who wish to come for a day to tell the kids about careers or areas of expertise.

“In order to make this program work the way I want it, we’ll definitely need to have the community involved,” she said.

Paul Chason, CEO of the Atmore Area YMCA, said he is excited about what Vile will bring to the summer camp program.

“The YMCA is seeking to provide a fun, but structured, educational camp this summer,” he said. “Donna has worked very hard to make this concept a reality.”

A debate forum for Alabama Senate 22 candidates was held at the Faulkner State Arts Center in Bay Minette on... read more