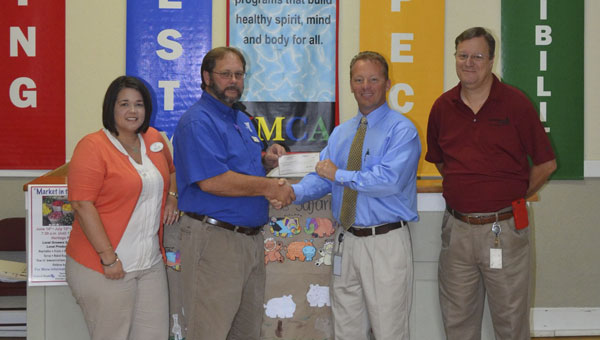 Thanks to a recent grant from Alabama Power, the Atmore Area YMCA will be able to upgrade its existing air conditioning units, and also save additional money over the next several years.

Alabama Power awarded the YMCA a $10,000 grant through its NEEP (Non-Profit Energy Efficiency Program) program. This money will not require any match from the YMCA.

Paul Chason, CEO of the Atmore Area YMCA, said that the YMCA applied for the grant several months ago, and is ecstatic to receive it. He said Alabama Power recently completed an energy survey at the YMCA building, and determined that the air-conditioning upgrades will help the organization save $4,500 per year on utility costs.

“I’m very appreciative of Alabama Power and its foundation,” Chason said. “I certainly hope other businesses and establishments will step in and help with the YMCA.”

Lee Hall of Alabama Power Company said that this grant program is only open to non-profit organizations or public utilities, and not to commercial or retail customers. He said that Alabama Power representatives used the energy survey to determine the YMCA’s need for the grant, before deciding to award the organization the maximum $10,000 amount.

Ricky Martin, the manager of Alabama Power Company in Atmore and the chairman of the YMCA’s Board of Directors, said the grant would fill a significant need for the YMCA.

The NEEP program is a part of the Alabama Business Charitable Trust Fund, which was established 20 years ago by Alabama Power Company. Since 2007, more than 65 grants have been awarded to organizations across the state.