Bryan sworn in as PCI chair 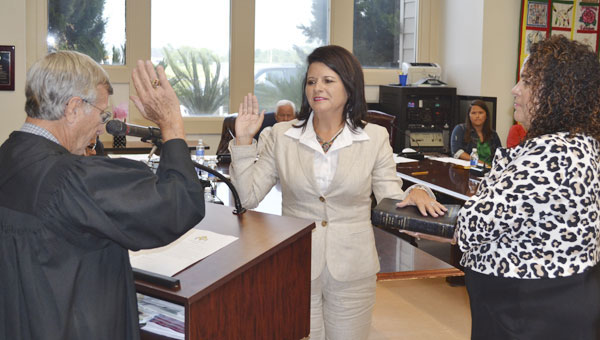 New PCI tribal chairman Stephanie A. Bryan recites the oath of office as she is sworn in Thursday by Judge Joe Brogden and Kelli Ramer, PCI tribal council liaison.

Stephanie A. Bryan was officially sworn in as the Poarch Band of Creek Indians’ tribal chairman during Thursday’s PCI tribal council meeting.

Bryan replaces outgoing chairman Buford Rolin, who had served in the position since 2006. She was elected as chairman during an election on Saturday, June 7.

Bryan fought back tears at several points during Thursday’s meeting, as she accepted new responsibilities as the tribe’s first female chairman.

“I am so humbled and honored in the faith and confidence my constituents have in my leadership,” she said. “I will always remember where we came from, so that we know where we are going.”

Bryan also talked about her grandmother, who passed away before PCI received its federal recognition in the 1980s.

“She would have been so proud of me and our tribe today,” she said.

Also during Thursday’s meeting, Arthur Mothershed and Garvis Sells were sworn in for new terms as re-elected tribal council members.

The tribal council unanimously appointed Robbie McGhee to serve as vice chairman, and Mothershed as treasurer. These appointments are official until a special election can be held at a future date.

McGhee had previously served as the treasurer, and Bryan was the vice chairman.

Rolin made several comments in the chairman’s chair, before ceremonially switching seats with Bryan midway through Thursday’s meeting.

“I plan to be around and certainly if I can be of any assistance in any way, I’m here,” he said. “It’s a privilege for me to introduce you to your new chair, Miss Stephanie Bryan.”

For more on this story, see the Wednesday, June 18, edition of The Atmore Advance. 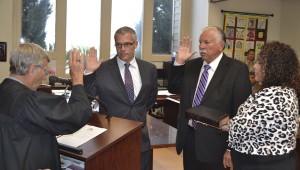 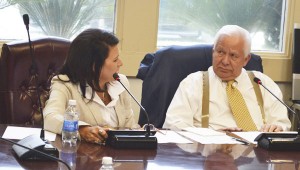 David Gehman plays “The Star Spangled Banner” on his trumpet during Saturday’s Market in the Park in Heritage Park. The... read more