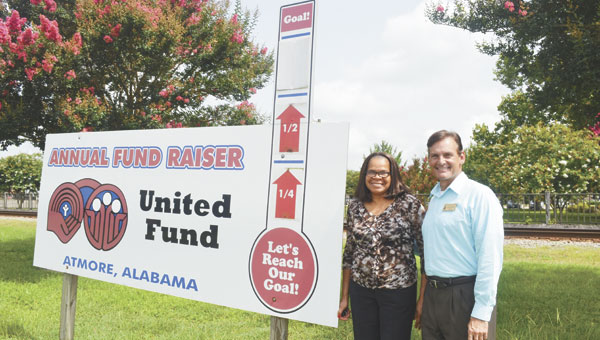 The United Fund of Atmore is slightly short of its goal for 2014, and vice president Sandra Gray and president Bub Gideons are encouraging all businesses to give to the fund, which helps support a variety of local causes.

The United Fund of Atmore is making one last strong push to reach its goal for the 2014 fund raising campaign.

Gideons explained that July 31 is the final day that donations can be received for the 2014 United Fund campaign. If enough money is not received to make the goal, then the United Fund will have to prorate its promised allocations to community organizations in the last three months of the 2014 calendar year.

The United Fund helps support many local agencies and organizations, including the American Red Cross, Atmore Public Library and local youth sports.
“We’re going to be reaching out to businesses in this next month to try and reach our goal for the year,” Gideons said. “It’s important to note that every single penny raised by the United Fund stays here in our community, helping local organizations. Nothing goes toward administrative costs or a national organization.”

“This money goes to organizations that help everyone in our city,” she said. “That’s why we’re going to be asking local businesses to help out any way they can, too.”

Business of the Month named