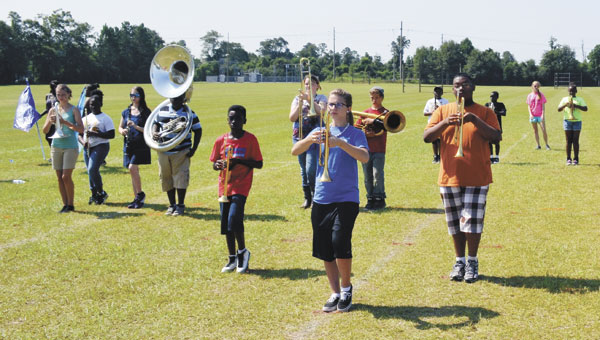 Those 60 students are participants in the ECHS band program, and they have been participating in the annual band camp. The camp began last Monday and will continue through Friday, according to ECHS band director Hayley Cockrell.

On Friday at 4 p.m., the students will perform a special show for their parents and friends, where they will show some of the different numbers they have been working on for the last two weeks.

This year’s band show will have a James Bond theme, Cockrell said. The students will not only play the well-known Bond theme song by Monty Norman, but also several title songs from the movie series. Those songs include “The World Is Not Enough,” “Die Another Day” and “Live and Let Die.”

During the show, the marching band will also spell out “007” on the field, Cockrell said.

Cockrell expects that there will be approximately 60 members of the band this year, including the majorettes and color guard. Her band program is exceptionally young this year — the biggest classes are in the sixth grade and 10th grade.

“We’ve probably doubled from size from the band last year,” she said. “We’ve had a very strong program at the middle school and a lot of those students have kept with it.”

Junior Rykker Powell is the primary drum major this year, and plays tenor saxophone. The assistant drum major is sophomore Ariel Whatley, who plays the baritone.

Cockrell said it has been a challenge to keep every day of band camp fresh, but they often do games and competitions to encourage skill growth. In addition, she said that the older students have done a great job of leading the younger band members.

“Some of these guys are so new that they might have never marched before,” she said. “The older students are willing to grab one of those rookies and give them some one-on-one help, which makes things a lot easier. We’ve had little competitions with rewards like extra break time, for those who do really well.

“We’re just trying to do anything we can do to make the camp fun, which makes it easier for the students.”

Cockrell said that the band program has been the beneficiary of great community support in the past year. In late 2013, the Atmore Lions Club held a pancake night fund-raiser to help raise money for band instruments.

With that money, the band was able to purchase a new sousaphone. The band program also recently received a grant from State Rep. Alan Baker, which helped with the sousaphone’s purchase.

Cockrell said other community members also made donations, either of money or of actual instruments. Thanks to the support, the band program was able to add a marching trumpet, professional baritone, two trombones and two flutes to its collection.

“I can’t tell you how many times I’ve heard from the kids that they didn’t realize the community would support them as much as they have,” Cockrell said. “They’re very humbled, and I’m very humbled, by the support that we have gotten from the Atmore community.”

Cockrell said that the arts are not only a wonderful tool to allow students the chance to express themselves, but they also help to build character.

“Once I put a new instrument in a child’s hands, all of a sudden they’re standing up straight and holding their shoulders high and proud,” she said. “They’re usually practicing with it day and night, and they really gain some self-esteem and pride.

“For some of these kids, they just want somebody to believe in them, and being a part of the band is a way that we can do that.”