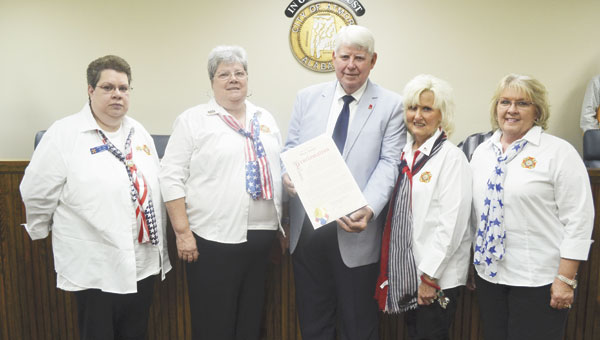 The city of Atmore will join the rest of the nation in commemorating the special day, which is designed to bring attention to military veterans who were lost during combat or taken in as prisoners of war.

Although no special events are currently scheduled, businesses and residents are encouraged to mark the day by decorating buildings with black-and-white wreaths, ribbons, or balloons.

“There’s no way we can thank our veterans enough, especially those who are missing,” Staff said.

Members of the Atmore Veterans of Foreign Wars Post 7016 Auxiliary made the request. Those in attendance included Gayle Johnson, Jenny Hutto, Ginger Stabler and Debbie Thornton.

• Publicly congratulated the city’s 10-under Cal Ripken All-Stars for finishing in second place at the state tournament.

• Approved a tax abatement for Alto Products, to allow the company to complete a $2 million expansion project.

Marshall Rogers, executive director of the Escambia County Industrial Development Authority, said the project would be ongoing and will allow the company to add five employees.

The council unanimously approved the abatement, with Chris Harrison abstaining. Harrison explained that he abstained because he does business with Alto Products.

• Re-appointed Rex Rose to the Atmore Public Library board of directors.

Sideline reporters can be really pointless

With football season quickly approaching, I must make a comment about these sideline TV reporters, both men and women, spewing... read more