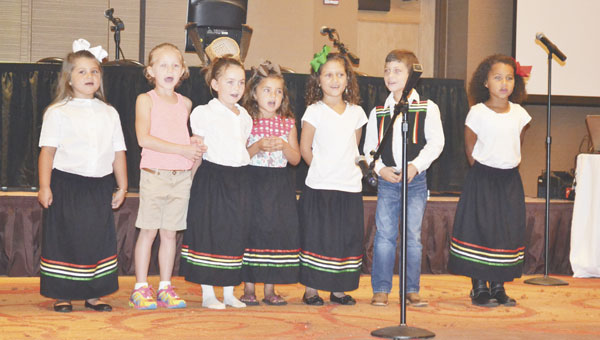 The Poarch Band of Creek Indians (PCI) hosted a special conference last weekend, observing the 200th anniversary of the Red Stick War of 1813-14.

The “Planting Seeds of Knowledge” conference was held throughout the day Saturday at the Coosawada Ballroom at Wind Creek Casino & Hotel. All activities were free and open to the public.

The Red Stick War, also known as the Creek War, was a regional war between Creek Indians, Europeans and the United States, fought primarily in Alabama and along the Gulf Coast. The War ended in August 1814, when the Treaty of Fort Jackson was signed and the Creek Indians were forced to cede more than 21 million acres of land to the United States. Most of this land was in southern Georgia and central Alabama.

Saturday’s events included academic discussions of the War by anthropology professors, PCI tribal archivists and authors. There were also stomp dancing demonstrations and tribal hymns, sung by students at the Fred L. McGhee Learning Center and by the PCI Tribal Princesses.

“We were hoping to plant seeds of knowledge about tribal history, in relation to the Red Stick War,” said Dr. Deidra Suwanee Dees, PCI tribal archivist. “We gave each attendee a copy of the entire Treaty of Fort Jackson, so they could read it. Many of them had only read excerpts or pieces of it, and it’s an important historical document that shaped and changed American history and Creek history.”

During the evening, visitors were invited to enjoy “An Evening With the Elders.” Those in attendance heard digitized recordings of interviews made in 1972 by Florida State University anthropology professor Dr. J. Anthony Paredes. In 1972, Paredes interviewed several Creek elders about their history and culture; those interviews proved beneficial in allowing PCI to earn its federal tribal recognition in 1984.

Dees said there were 264 visitors who attended the conference, and organizers had set a goal of 200.

“The attendance exceeded our expectations,” she said. “We hoped to fill in gaps and voids in knowledge and provide a more in-depth understanding of our history, and I believe we were able to do that.”

Dees also expressed her pride that most of the speakers and entertainers were from PCI. The only two who were not from PCI were two anthropology professors from the University of South Alabama, Dr. Philip Carr and Dr. Gregory Waselkov.

“It was our goal to tap into the resources, talents and wisdom of our own people, first and foremost,” she said.

Saturday’s conference was a joint venture between the Office of Archives and Records Management and the Tribal Historic Preservation Review Board at PCI. It was made possible by funding from the PCI Tribal Council.