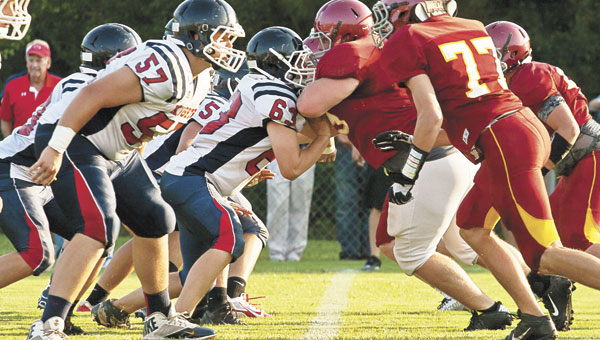 EA players try to break through the Deerfield-Windsor line during a scrimmage earlier this year.|Photo by Ditto Gorme

Escambia Academy and Northview High School will each open the 2014 football season Friday, as they travel on the road to face tough opponents.

The EA Cougars, who finished 10-3 last season, will try to open this year on a positive note as they travel to Prattville to face Autauga Academy.

While many high-school teams open their seasons with non-region games, that is not the case for EA. Autauga Academy is the newest member of the AISA Class AAA, Region 2.

Last season, the Generals finished with a record of 8-3, including 3-3 at home. They lost to Clarke Prep, 52-27, in the second round of the Class AA playoffs.

EA had been scheduled to play Northview on Friday, Aug. 22, but that game was canceled. Instead, the Cougars held a “Meet the Cougars” night at Bachelor Field.

Friday night’s kickoff is at 7 p.m. in Prattville.

Northview will open its 2014 season Friday, as the Chiefs travel to face Bozeman in Panama City at 7 p.m.

The Chiefs were scheduled to play EA last Friday night, but that game had to be canceled. Instead, NHS held a “Garnet and Gold” scrimmage game.