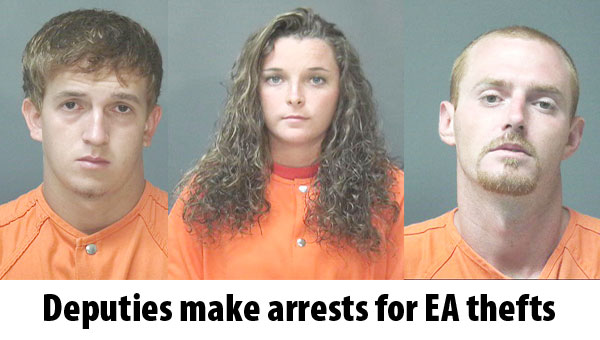 Escambia County Sheriff’s Office deputies recently charged three suspects for two separate burglaries that took place at EA in recent weeks. The suspects are, left to right, Lawrence Ramer, 19, Chelsey Ramer, 19, and Christopher Nall, 29. A fourth suspect was a 17-year-old juvenile who was not identified.

Four suspects were recently charged, for two separate burglaries that each took place at Escambia Academy.

Mike Lambert, chief deputy with the Escambia County Sheriff’s Office, said that two adults were arrested Tuesday for a theft that occurred July 28 at EA.

Arrested were Chelsey Ramer, 19, and Lawrence Ramer, 19, both of Atmore. They were charged with third-degree burglary, third-degree theft of property and second-degree criminal mischief, with bond set at $10,000. Also charged was a 17-year-old juvenile, who accompanied the Ramers to the burglary.

Lambert said that Alabama State Trooper Jimmy Dean, who lives adjacent to Escambia Academy, noticed a suspicious vehicle near the school on July 28. Lambert said Dean searched the vehicle and found softball bats and balls. The Ramers and the juvenile were inside the vehicle.

Lambert said that the suspects also removed some speakers from the property and damaged them, but did not take them.

Although the theft took place in late July, Lambert said that warrants were not taken out until the EA board of directors had officially decided to press charges.

As a condition of their bond, Escambia County District Judge Jeff White ordered the Ramers to stay off EA property.

Lambert also said that a Flomaton man, 29-year-old Christopher Alvin Nall, was arrested Friday and charged in connection with another theft at EA.

Investigators Kyle Ramsey and Justin Hetrick were able to obtain video of one of those transactions, and identify the suspect. Warrants were obtained for Nall’s residence and vehicle, and investigators found several of the items that were stolen, Lambert said.

Coley’s Petals & Parties was named the Business of the Month for September.|Photo by Michelle Smith The Atmore Area Chamber... read more