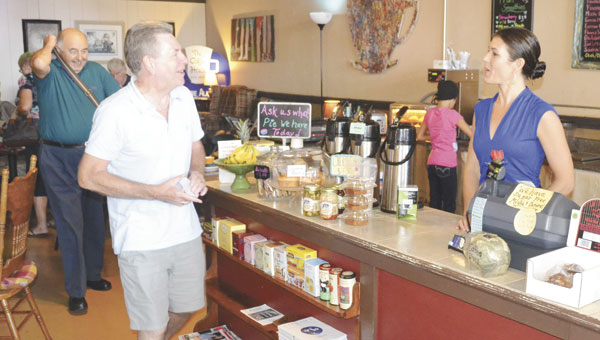 A visiting tourist from Great Britain thanks Kerra Mascaro for her service at The Coffee House on Monday.

The British might be well known for “tea time,” but on Monday morning a group of 41 British tourists stopped at The Coffee House in Atmore for some authentic Southern hospitality.

David Lilley, who operates a tour company in the United Kingdom, said that his tour group was scheduled to travel from Montgomery to New Orleans and realized they would need to make a rest stop along the way. Rather than stop at an interstate exit, he decided the bus should visit a Southern town — and he chose Atmore.

“It’s a beautiful downtown,” he said. “It’s a picture of small-town America and it has true character. We have restaurant chains in the U.K. but this shop is something unique that we can only experience here.”

Lilley notified The Coffee House owner Kerra Mascaro over the weekend, letting her know that the large group would be arriving Monday. Mascaro said she had had foreign customers before, but not such a large group of them.

“I’ve had people come from Germany, New Zealand, France, Belarus, Norway, and all over the globe,” she said. “I’d say that’s the beauty of the Internet; they can find out about us online. It definitely shows that it’s a small world.”

Pearl Mullen, who was visiting Atmore from the city of Wrexham in northern Wales, said that she was impressed.

“It’s a lovely town and the people here have all been very nice,” he said.

Margarett and Mike Carr, also of Wrexham, agreed that their visit was a positive one.

“Everyone down South has been lovely to us,” Margaret said.

Lilley said that the group toured the civil rights memorial and Dexter Avenue Baptist Church in Montgomery, and planned to see the French Quarter and Mississippi River in New Orleans.