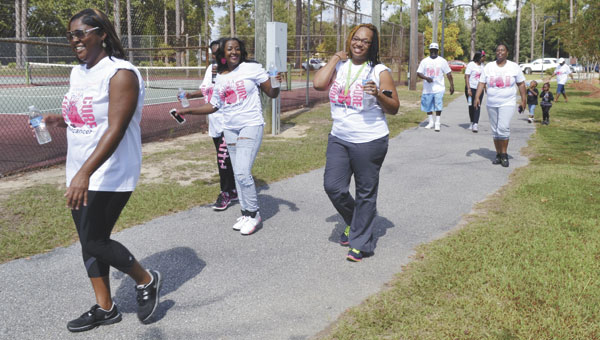 Participants in the Women of Distinction’s annual cancer awareness walk made several laps at Tom Byrne Park on Saturday, as a sign of their solidarity against cancer.

The Women of Distinction’s seventh annual Cancer Awareness Walk not only increased awareness of the deadly disease, but also raised money to help patients who are battling cancer.

The local women’s group holds the walk every year, but this time they decided to stage the entire event at Tom Byrne Park. The proceeds from Saturday’s “Walk in the Park” will be used to purchase gas cards to local residents who have to travel out of town for treatments and surgeries.

Dozens of walkers made several laps at the park, wearing T-shirts that included names of those who are fighting cancer, those who have survived cancer, and those who have died from cancer.

“I just didn’t want to believe it when I heard I had it,” said Shellie Sharp, one of the event’s special speakers. “It gave me a whole new outlook on life.”

Sharp was first diagnosed with cancer in 2010, but was told that she was cancer free in 2011. However, she noted that the disease could always return, and she continues to pray for herself and others who have battled cancer.

“God’s grace and mercy will lead you through the battle,” she said.
Atmore city council member Susan Smith praised the work of Women of Distinction, not only at the cancer walk but also in their other activities throughout the year. Smith is also a cancer survivor, who was first diagnosed in 1982.

“It’s definitely something that changes your life,” she said.
The keynote speaker was the Rev. Harold Askew, pastor of New Pleasant Hill Baptist Church. Askew said he has had several family members who have succumbed to cancer, and commended those who came out to participate in the walk.

“I want to encourage you to keep fighting and never give up hope,” he said. “We know that God is still able to do great things.”

Askew noted that polio and tuberculosis were once considered deadly diseases, and now both are treatable and have been nearly eradicated.
“I believe that one day we will see the same triumph over cancer,” he said.

For more information about the Women of Distinction and the availability of the gas cards, call (800) 227-2345 or email womenofdistinction@live.com.

Members of the Atmore Lions Club meet with ECHS administrators and Ruth Harrell of the Coalition for a Healthier Escambia... read more