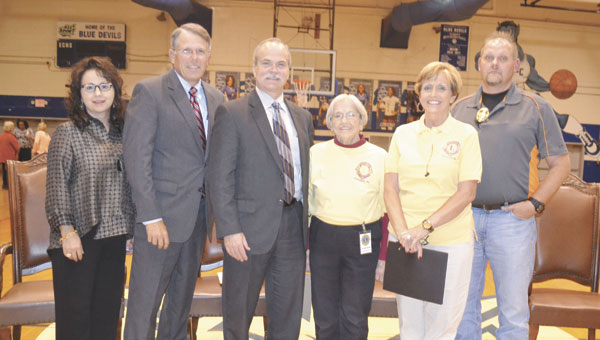 The Escambia County High School gymnasium was the sight of some important “life lessons” Thursday night, as the Atmore Lions Club sponsored the first “Drugs Erase Dreams” rally in Atmore.

A similar rally was held last March in Flomaton, and organizers hope to eventually take the program to other area high schools. Hundreds of citizens and students filled the bleachers Thursday to hear several speakers talk about drugs and the danger they pose to communities.

“The root word for ‘ignorance’ is ‘ignore,’” Byrne said. “We can no longer ignore the problem of drugs in our community.”

Both Jordan and Byrne have spent time presiding over the county’s drug court, and also handle cases dealing with juvenile delinquency and drug abuse. Jordan said that young people need to realize that abusing drugs hurts more than just the user.

“I have dealt with the impact of drugs on not just young people, but also on their families,” he said. “Drugs can literally change the anatomy of the brain. Some of them will literally eat holes in the brain.”

Jordan told parents to stay vigilant of their children’s activities, and gave them a few telling signs that their kids might be trying drugs. He noted that drug users often withdraw from normal activities, change their friends and appearances, and experience negative changes in their grades.
Jordan also said that sometimes parents need to show their kids some “tough love” if they are caught with drugs.

“I know it might seem harsh, but the faster they start to feel accountability for the actions, then it’s more likely they’ll stop right away,” he said. “I’m just saying, don’t necessarily rush down to bail them out [of jail] right away. Sometimes it’s important to be taught a tough lesson.”

Walden and Carlee spoke about some of the new drugs on the market, and also noted that even common drugs have changed over the years.
“The marijuana that we see today is far different from what we smoked in the 1970s and 1980s,” Walden said.

Walden also agreed that parents need to pay attention to their kids, to prevent the drug problem before it starts.

“Parents, you have a right to search your kids’ room,” he said.

Carlee said that there is a misconception that synthetic marijuana, or “Spice,” is safer than other drugs. She pointed out that Spice is often sprayed with chemicals, and there is no way of knowing what chemical it might contain.

“Your first hit could be lethal,” she said.

Carlee detailed a variety of drugs and pointed out some of their common “street names.” She also talked about some of the newest drugs on the market, and some that are still making their way to the United States.

One such drug is called “yaa baa” or “shabu.” Carlee said it is already popular in southeast Asia and has been called “the next heroin.” She noted it is especially dangerous because it is often flavored with fruit juices like grape or orange, which makes it even popular among children.

She also talked about the Russian drug, “krokodil,” a variety of morphine that is so potent it actually causes the flesh to turn dark and scaly. For some of the drugs, Carlee displayed photos of users’ skin and faces, to show the toll that drugs put on the body.

“You’re putting battery acid and red phosphorus in your body when you take meth,” she said. “I know that these pictures aren’t pretty, but I promise you that if you get on drugs, it will not be pretty.”

ECHS students Kendal King and Cheyenne Chafin try to pedal a tricycle while sending a text message, during an activity... read more