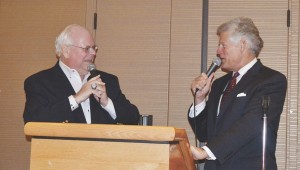 Steadham was only making a quick visit in Atmore, as he caught a flight the next day to New York City to attend the Heisman Trophy ceremony in New York City. Steadham is one of the writers who had a ballot in this year’s voting.

Gold has been the radio voice of the Alabama Crimson Tide since 1988, and has been voted the Alabama Sportscaster of the Year four times. Although born in Brooklyn, N.Y., Gold has become beloved as a Crimson Tide partisan and fan whose distinctive radio calls fill countless households every fall.

At the PCI banquet, he told the young people in attendance that they should follow the advice of Alabama head football coach Nick Saban.

“Coach Saban always reminds youngsters that if you try hard, you can achieve anything you want to do,” he said. “Also, every choice that you make has consequences, either good or bad. We have seen far too many kids in college football who have made bad choices.”

Hunter played for Alabama coach Paul “Bear” Bryant for several years, before being drafted by the NFL’s Green Bay Packers in 1971. He played for eight seasons, with the Packers, Detroit Lions, Atlanta Falcons and Buffalo Bills.

Hunter told the banquet attendees of a game where Bryant had called timeout and brought the team over to get their next play. However, he just told Hunter to “run the best thing you’ve got.” Hunter led the offense to a touchdown.

“Sometimes we can overanalyze and over-complicate things in our life,” he said. “Sometimes, maybe we should just do what Bear Bryant said, and ‘run the best thing we’ve got.’”

Someone attending the banquet asked Gold what was the most memorable game he had ever attended. Taking the championship games out of the equation, Gold likely surprised many in attendance when he chose a basketball game.

“I just remember the emotion of that night,” Gold said. “To be a part of that atmosphere, that was probably the most memorable night I’ve ever had with Alabama (other than a championship game).”

Hunter talked about his first college start, when the opponents’ canine mascot was ornery and tried to bite him several times. When Hunter attempted to kick the dog, Bryant called him over for a talk.

“He came up to me and said, ‘Scott, son, we’ve got enough problems without you trying to kick their dog!,’” Hunter said, to laughter from the crowd.

Another banquet attendee tried to get Gold to say “Touchdown, Alabama,” but the wily veteran sportscaster smiled and declined.

The Board of Directors of the Alabama Sports Hall of Fame recently announced the Class of 2015 for induction into... read more