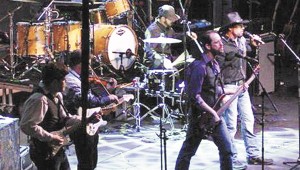 Area band “Shane Harrell and the Major Moves” will open for The Band Perry in a concert at Auburn University in January.

The headline acts at the concert include The Band Perry and Cole Swindell. Auburn alumnus Tim Hudson, a member of the 2014 World Series champion San Francisco Giants, and his Hudson Family Foundation is hosting the concert.

Comedian speaker Jody Fuller will be the master of ceremonies, and the opening acts will be the Blane Rudd Band, Major Moves and Swindell.

“I’m blessed that my band is going to have the chance to entertain such a great crowd in such an awesome venue,” Harrell said.

Harrell said that Major Moves plays a little of both country and Southern rock music. They do some original songs, as well as covers of popular hits.
Other performers in the band include Michael Morris, a lead guitarist from Evergreen who is a 23-year-old student at Troy University; Keith Johnston, a keyboardist from McIntosh; Ace Wilson, a bass guitarist from Monroeville; Mark Welborn, a fiddler and guitarist from Mobile; and Daniel McCann, a steel guitarist from Spanish Fort.

Harrell also said that Colby Flournoy, a 16-year-old ninth grader at Northview High School, will be performing as a backup vocalist and rhythm guitarist. He noted that Flournoy is a member of the Poarch Band of Creek Indians and is a “champion chicken dancer.”

“We’d just like to thank everybody who has bought tickets and supported us at our shows,” Harrell said.

Major Moves will also be performing at Wind Creek Casino & Hotel on Thursday, Jan. 29, at the Sound Lounge.