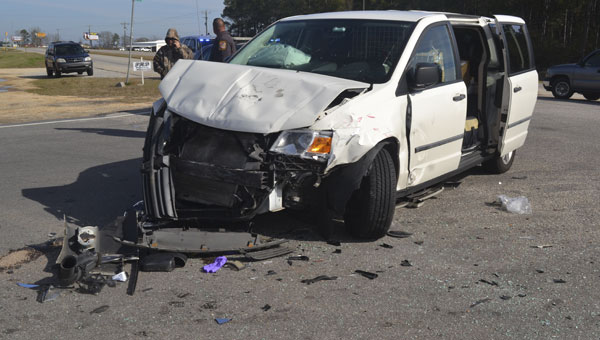 The driver of this Dodge Grand Caravan was injured and transported to North Baldwin Hospital, after a Monday morning crash at the intersection of Highway 21 and Woods Road.

Two people were injured in a three-vehicle crash Monday morning on State Highway 21.

The accident took place at 10:33 a.m., at the intersection of Highway 21 and Woods Road. Alabama State Trooper Jimmy Dean said that the driver of a blue Chevrolet S10 pickup truck and the driver of a white Dodge Grand Caravan were both transported to local hospitals with injuries.

Trooper Kevin Cook later identified the driver of the Chevrolet S10 as Earl Smith, of Atmore. Smith was transported by medical helicopter to Sacred Heart Hospital, for treatment of his injuries.

Mike Burke, a spokesperson for Sacred Heart Hospital, said Smith was discharged from the hospital Tuesday.

Cook identified the driver of the Dodge Grand Caravan as Steven D. Gambaro of Gulf Breeze, Fla. Gambaro was transported to North Baldwin Hospital for treatment.

According to Dean, the S10 was traveling northbound on Highway 21 when it attempted to turn left onto Woods Road. The Caravan was traveling southbound when the vehicles collided, sliding along the road and striking a red pickup truck that was stopped at the Woods Road intersection.

The S10 stopped in a ditch at the southwest intersection of Woods Road. 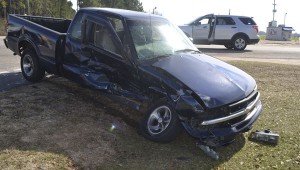 The driver of this Chevrolet S10 sustained a head injury and was transported to Sacred Heart Hospital.

Jerry Thomas of Bay Minette was the driver of the red pickup truck and was not injured. His vehicle had minor damage to the front bumper.

“I saw the blue truck slow down and start to make the turn, and I could see the van coming down the highway,” Thomas said. “I knew it was about to happen, and I just closed my eyes and hoped it wouldn’t be too bad. I know there’s no way the van could have stopped.”

2014 was a very busy year in Congress

By U.S. Rep. Bradley Byrne When I was elected to Congress last December, I vowed to hit the ground running... read more