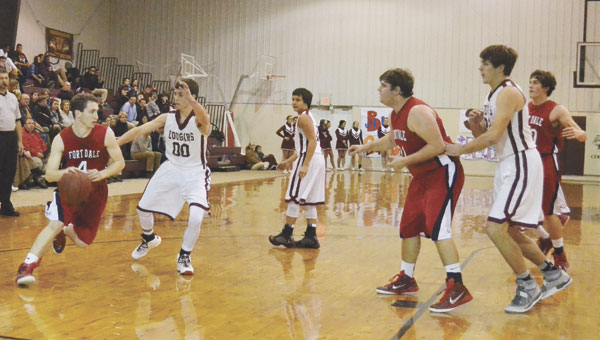 EA fell to visiting Fort Dale Academy on Friday night, by the score of 41-34. However, the Cougars bounced back in their next game, winning Saturday at Russell Christian (in Meridian, Miss.) by the score of 39-33.

EA was scheduled to host Monroe Academy on Monday night, but that game was not completed by press time.
In Friday night’s game, the Cougars kept the game close throughout, before falling late.

EA trailed Fort Dale 8-7 after one quarter of play, but responded in the second half to go into halftime tied at 17.

The Cougars opened the third quarter with a 6-0 run, leading 23-17 with 4:07 left in the third when the Fort Dale coach called a timeout. The Eagles then took control in the rest of the quarter, and the teams were again tied at 25-25 at the end of the third.

Fort Dale broke away in the fourth quarter, starting with a 10-0 run and building a 35-25 lead with 5:04 remaining in the game. The Cougars bounced back to cut the lead to six points with 1:33 left, but could get no closer.

The Lady Cougars trailed Friday night’s game against visiting Fort Dale by 14 points at halftime, and could not rally late.

Fort Dale led 28-14 at halftime and 44-25 after three quarters of play. The Lady Cougars got closer in the fourth quarter, but ultimately fell by the score of 57-37.