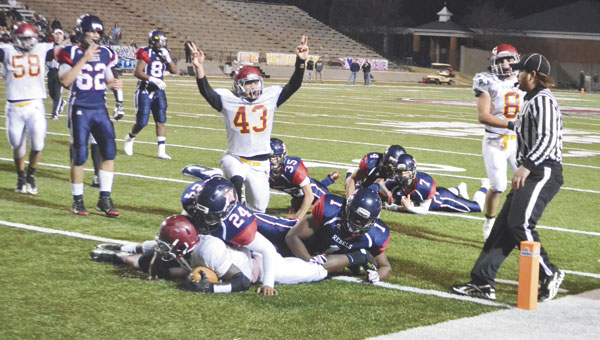 Escambia Academy’s Garrett Kirk (No. 43, signalling touchdown) was named the winner of the AISA Lineman of the Year award Wednesday.

Kirk, who also played tight end and punter for the Cougars, won the award as the best lineman in all three AISA classifications. Also nominated for the award were Monroe Academy offensive lineman Trey Carter and Restoration Academy defensive lineman Tim Collins.

Kirk and the Cougars finished the 2014 season with a record of 12-1, and won the AISA Class AAA state championship.

For more on this story, see the Wednesday, Jan. 21, edition of The Atmore Advance.

The Escambia Academy Lady Cougars defeated the visitors from Monroe Academy on Monday night, while the Cougars fell by one... read more