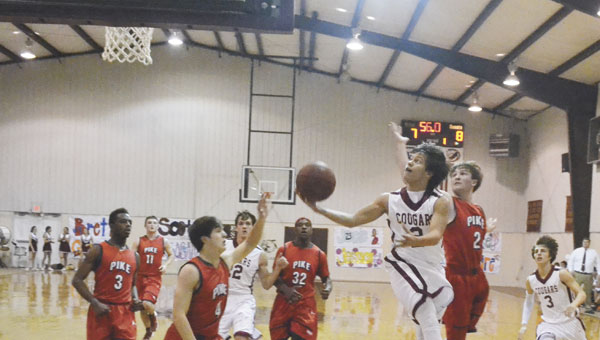 Escambia Academy’s Garrett Kirk scored his 1,000th career point Friday evening, but after the game he said the milestone meant a lot more because the Cougars also won the game.

“It was nice to score my 1,000th point, but it was a lot better knowing that we were in the lead late,” Kirk said. “It was a close game all night long.”

The EA Cougars earned the win over visiting Pike Liberal Arts, by the score of 56-49. The Cougars trailed 10-9 after one quarter, but tied the game at 18-18 heading into halftime. EA led 39-33 after three quarters of play.

“We had 16 turnovers in the first half,” EA coach Kevin Woods said. “Once we stopped turning it over later in the game, we began to play better. We moved the ball a lot better in the second half and got some good looks off our fastbreak.”

Kirk came into Friday night’s game needing 12 points to reach 1,000. He scored 13 points Friday, with the decisive field goal coming with 1:06 left in the game. Play was paused for a few seconds, to allow Kirk to receive a special plaque commemorating the occasion.

“This is the second time I’ve had a player score 1,000 points for his career,” Woods said. “Garrett has been a big part of our team ever since the ninth grade. He’s a great kid and he deserves all of the accolades that he receives.”

In the earlier game, the Lady Cougars fell by the score of 47-41. Alia Snow and Mikayla Spruill each scored 14 points for EA, and Anna Catherine Sasser added 11.

EA’s next home game is Saturday against Morgan Academy, with the girls’ tip-off scheduled for 6 p.m.